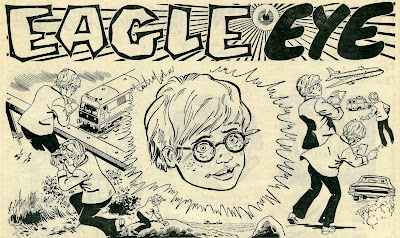 Eagle Eye continued the tradition of SHIVER AND SHAKE suspense and adventure features by offering readers a chance to follow the story and win some cash. It was a simple detective yarn with no magic or the supernatural involved. I am not sure who the illustrator was, although the style looks familiar. The two-page feature appeared in SHIVER section but the last episode of the second tale was in SHAKE.

Eagle Eye was the nick-name of the main character – a London school boy Tommy Trotter. The young man had a very sharp eye for spotting things that escaped other people’s attention and his powers of observation were remarkable.

In the first story Tommy Trotter spotted something strange about a baker’s van, followed it and discovered it was used in a robbery. In the process of trying to get a better look at the criminals so that he could describe them to the police, the lad is captured by the gang and taken to a spooky old house where he is kept prisoner. The alert and observant boy doesn’t take long to find a way to escape and shake off his persecutors. He leads the police back to the old house and uses his extraordinary talents to help officers in recovering the loot and arresting the gangsters. 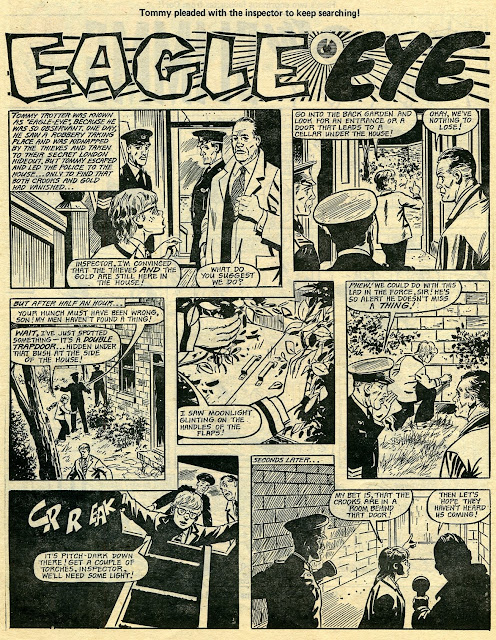 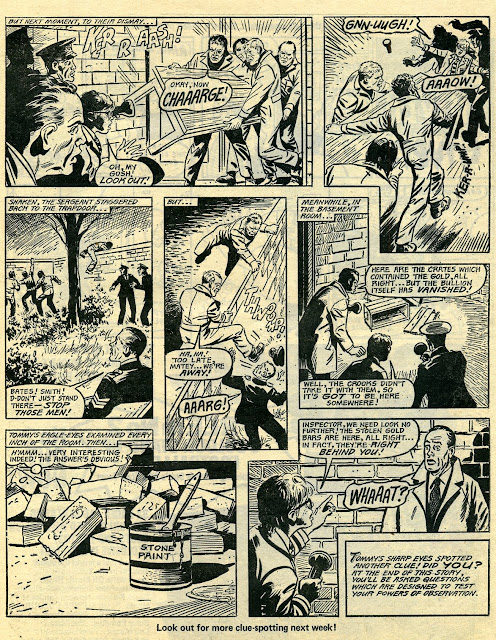 In every episode Tommy Trotter spotted an important clue and readers were encouraged to keep their eyes peeled for them because the clues were their chance to win a cash prize. This is the announcement that came after the last episode in issue 31: 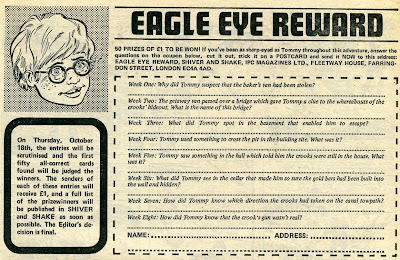 The clues were revealed and names of the lucky prize-winners printed ten weeks later in issue 41 (December 15, 1973): 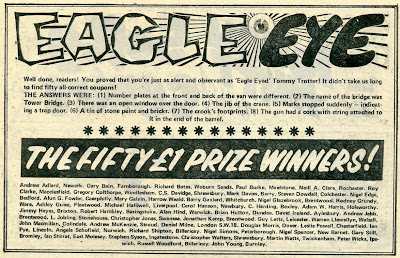 The second Eagle Eye story started next week in issue 42. This time we see Tommy travelling with his parents to a ski resort in Scotland. On the train he spots a suspicious pair and soon finds out that they are Professor Simon Dale, an atomic scientist from the Government research centre in Cambridge, who is held prisoner by an enemy agent Igor (ah, those Russians!). Igor plans to take the Professor to the West Coast where a foreign submarine will be waiting to ship him abroad and then force him to reveal top-secret information.  As the story develops over the weeks, the youngster not only saves the Professor but also sinks the enemy submarine and hands over the enemy agent and the submariners to the authorities. 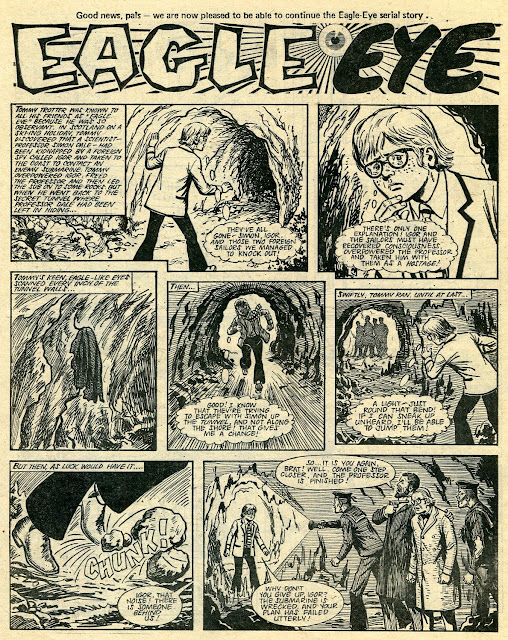 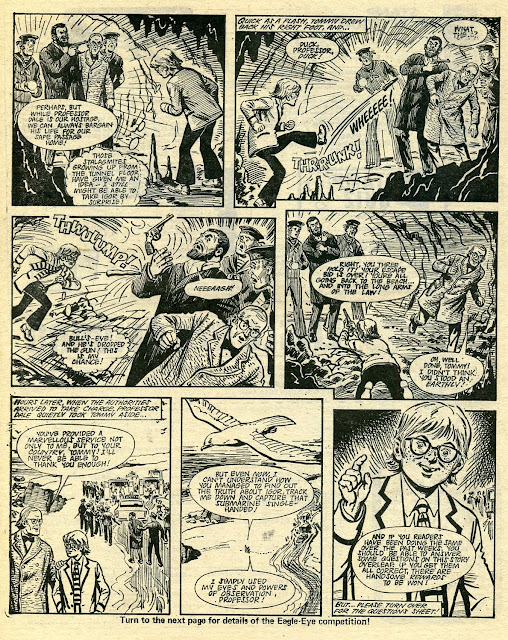 Once again, the last instalment comes with an announcement of the Eagle Eye reward. Fifty 1-pound prizes were up for grabs by the readers who were able to answer a few (embarrassingly easy) questions: 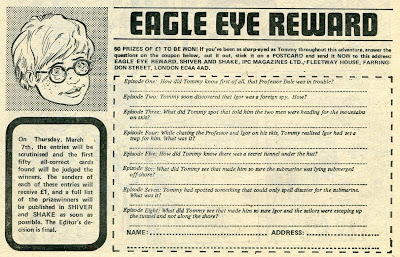 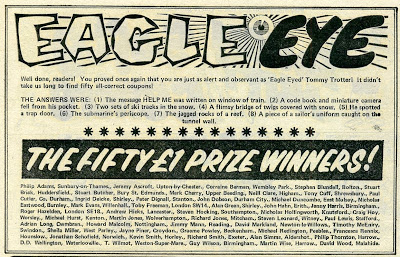 It looks like foreign spies and Igor’s accomplices did their best in trying to prevent readers of SHIVER AND SHAKE from following the second Eagle Eye story because weekly instalments of the feature were delayed on two occasions, necessitating the inclusion of the following notices by the Editor in issues 46 and 50:

It looks like the problems were post-related. The Editor urgently had to find something to fill the empty space with. This might be an explanation of the origins of a strange feature entitled ‘ED – That’s me, folks! It very much looks like something that was drawn and included at very short notice. ‘ED made only three appearances in SHIVER AND SHAKE weekly issues 46, 48 and 50. Note how two of the issues coincide with the Eagle Eye delays; I think this confirms the assumption that the strip was put together in a rush as an emergency space-filler. It is also found in a few SHIVER AND SHAKE annuals and holiday specials. 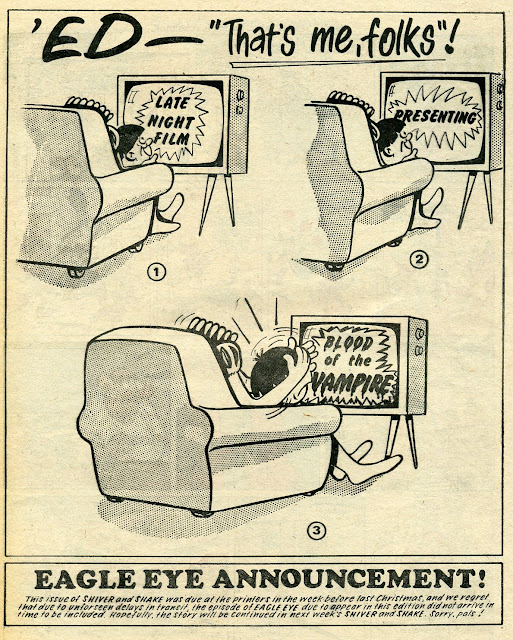 A nice episode of Eagle Eye was included in Shiver and Shake Annual 1975 where it was illustrated by the excellent Ron Turner; you can see the first page in my earlier post about the 1975 ShSh Annual.
Posted by Irmantas at 5:05 PM No comments: