And now for part two of this short series about Prof. Cube’s relatives. The episode is from  WHOOPEE!  Book of Frankie Stein 1977 – the second of the two highly-recommended Frankie Stein Annuals. The illustrator is again Mr. Frank McDiarmid. 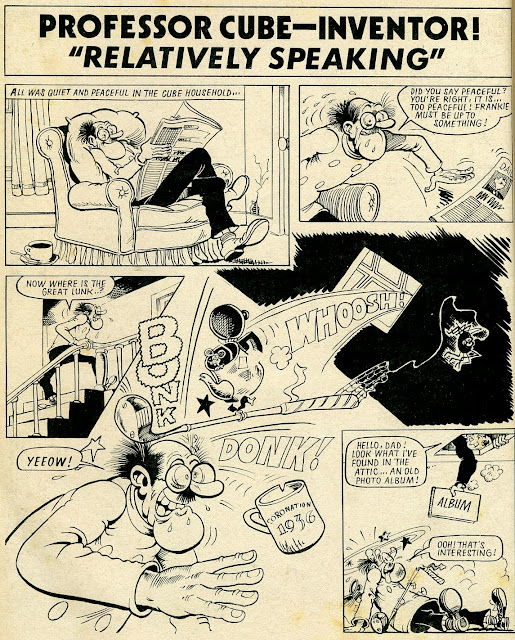 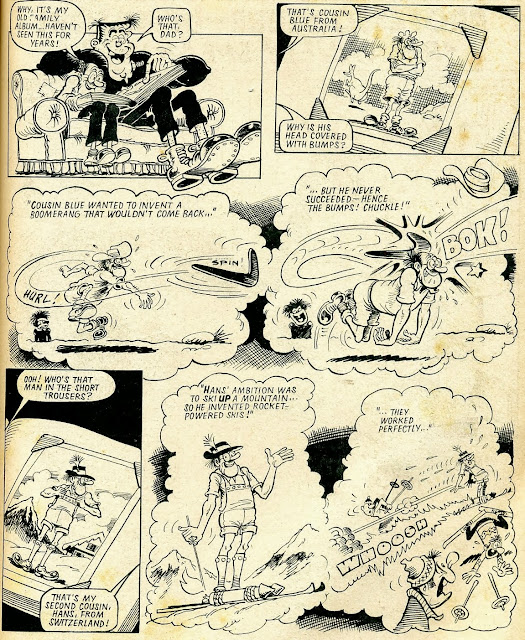 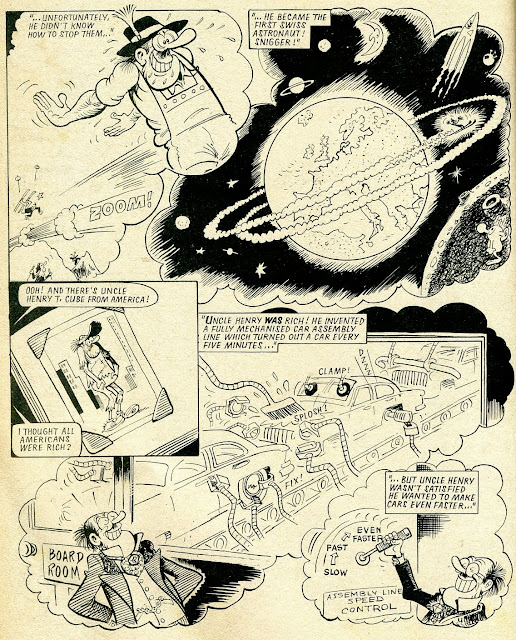 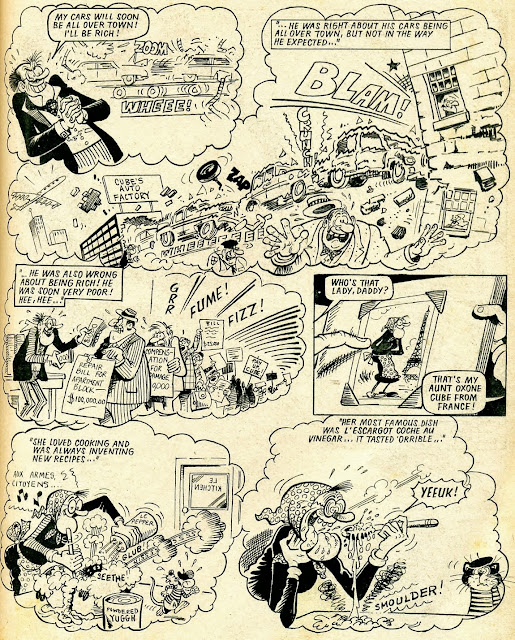 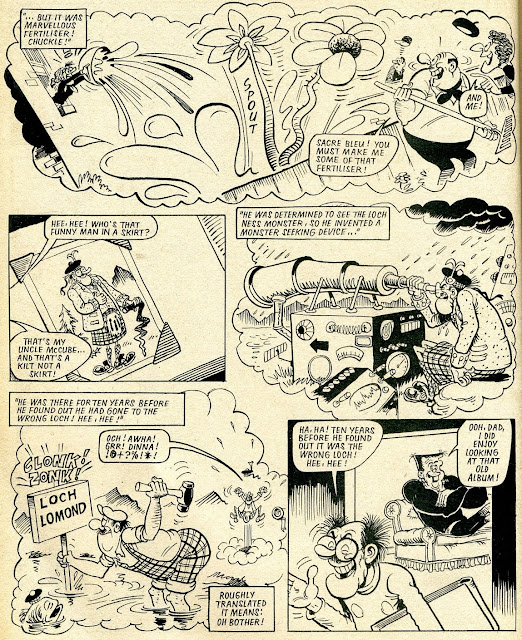 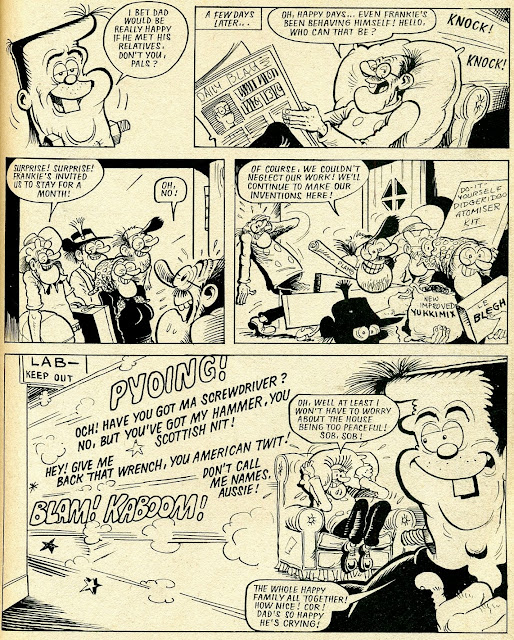 
In my previous post I mentioned strips that featured Prof. Cube’s family. I thought it would be refreshing to take a break from the routine of SH&Sh Annuals and Holiday Specials and actually show those strips because the publications they appeared in are quite rare and there is a good chance some of you haven’t seen them.

The first strip in the series of two can be found in the 1975 Frankie Stein Holiday Special and is devoted to Prof. Cube’s ancestors. The lively and dynamic artwork is by the excellent Frank McDiarmid. Come back soon for the second instalment featuring Professor’s aunts, uncles and cousins… 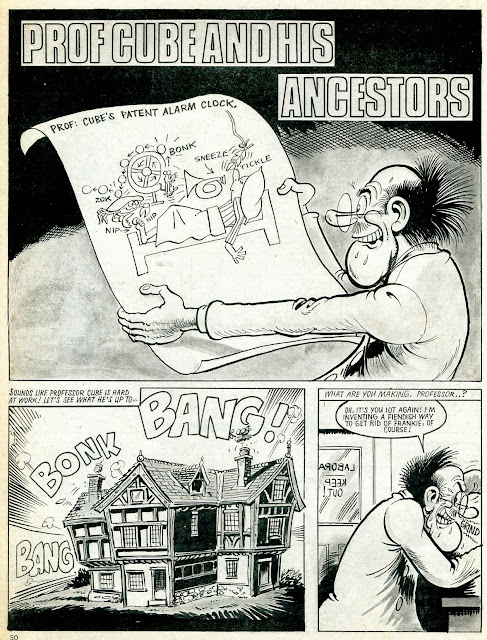 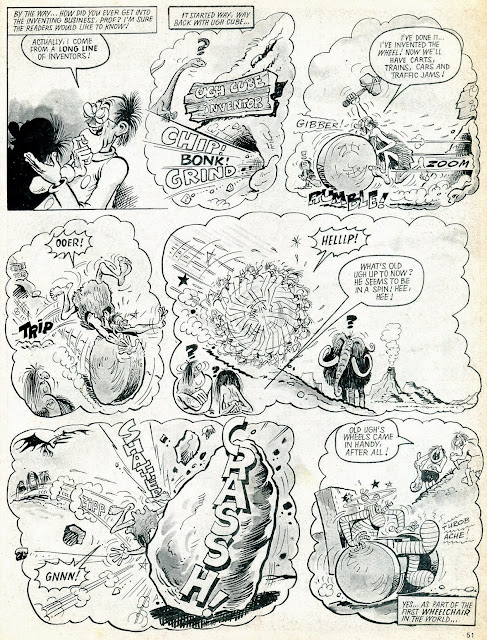 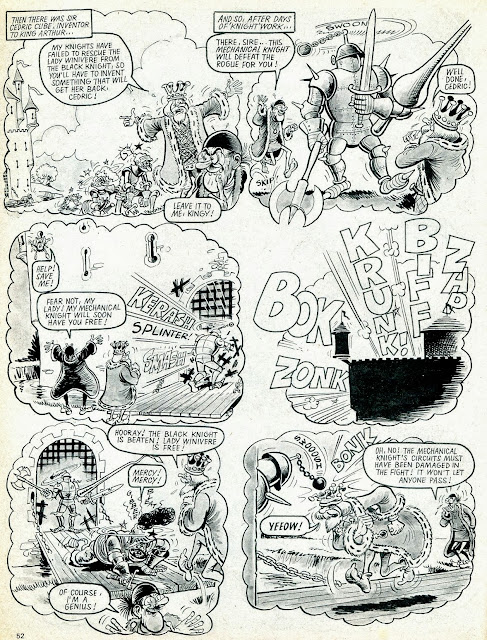 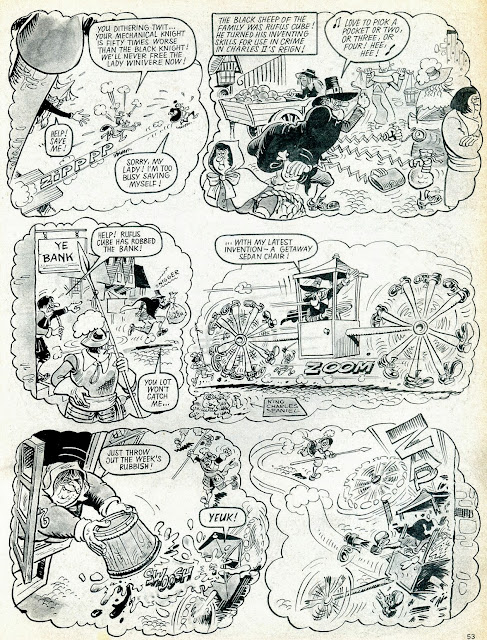 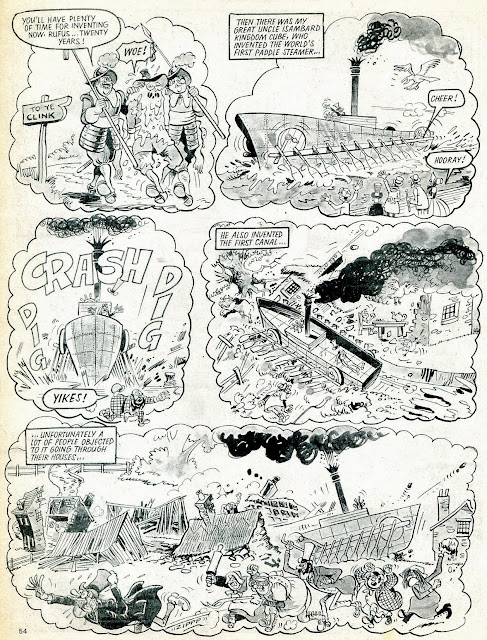 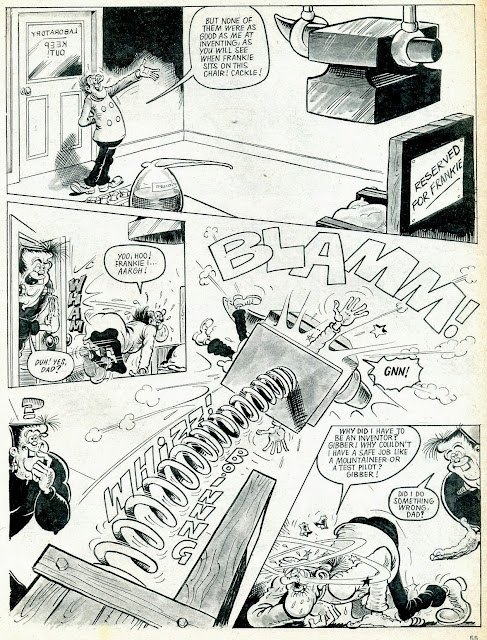 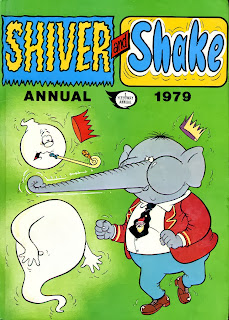 Assuming the above illustrator credits are correct, the biggest contributor of new material for this Annual was Jim Crocker with as many as 22 pages.  He was followed closely by Terry Bave (19 pages) and John Geering (17 pages), Paul Ailey also worked hard on this one and drew 12 pages.

In this 1979 SHIVER AND SHAKE ANNUAL The Forest Legion save a boy who is kidnapped and held for ransom by Boss and Butch, resident crooks of the strip. This doesn’t upset the gangsters very much because they already have the ransom money but the smart forest animals outwit the two crooks once again. The illustrator has included his autograph in the last panel. I think it says Mazza, which suggests the artist probably has an Italian connection… 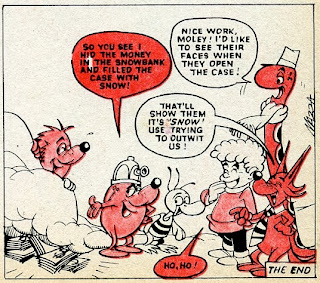 Jack Clayton’s gags were a fresh addition to the package: 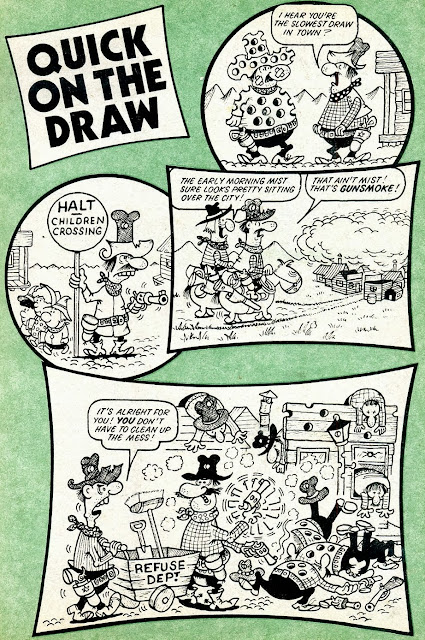 I find Jim Crocker’s Shark Snaps rather funny too: 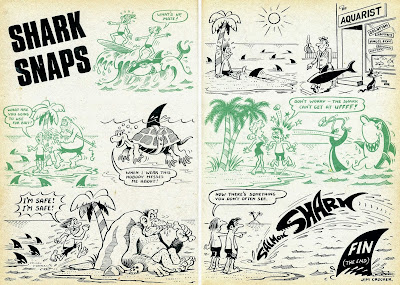 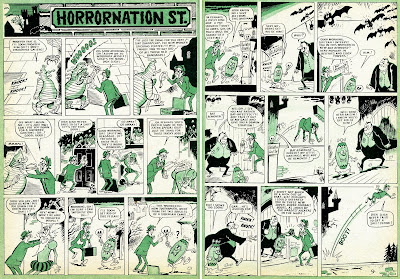 Grimly Feendish tries three different plots to pinch a diamond from the jeweller’s. Not only all of them fail but the World’s rottenest crook also sustains a concussion. His symptoms are quite bizarre:  he goes straight, runs all of his aides in and confesses to his own crimes too… 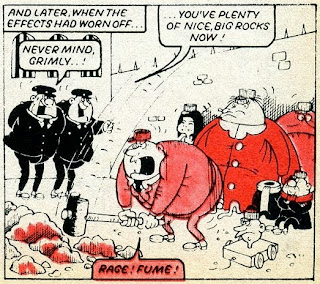 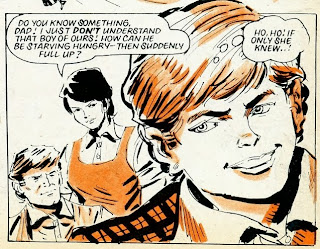 In Toby’s Timepiece, Mother is cooking dinner and Toby is not one of those who’d hang around for two hours doing nothing; time-travel addict that he is, he’d rather put his magical timepiece into action and face the consequences… This time he finds himself in ancient Rome and is forced to fight a trained gladiator. He uses his watch as a pendulum to hypnotise his opponent and is the victor but the Empress wants the timepiece because of its magic hypnotic powers. Then Toby foils an assassination attempt on the Emperor, gets his watch back as a reward and is invited to an imperial banquet as the Empress’ guest of honour. It is not surprising that upon his return to the present he doesn’t want any of the dinner that his Mother has cooked for him.

Now let’s take a look at the three new strips included in the 1979 SHIVER AND SHAKE Annual.

Good Deed Charlie illustrated by Paul Ailey (who mimicked Leo Baxendale and Tom Paterson) is a strip about a boy whose mission in life is to do good deeds for people. Sometimes the people are glad and sometimes they are not, but Charlie’s good intentions are always sincere: 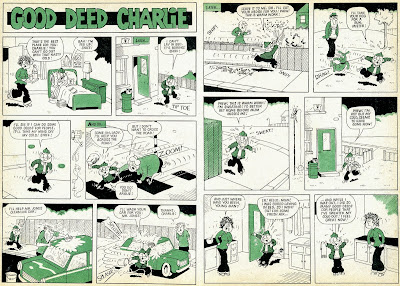 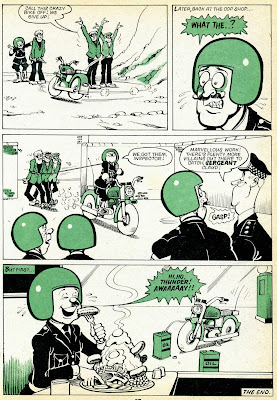 John Geering’s Constable Claud and his Magic Machine tells the story of Constable Claud who is a member of the bike squad but his mind is set on the Wild West rather than police work. A weird-looking repair shop manager casts a few spells on his bike and from now on the machine comes to life whenever Constable Claude gives the McGravel shout. The bike becomes a combination of a machine and a horse, and helps Constable Claud in his police duties.

The third new strip is also by John Geering but it hardly qualifies as completely new because the main character has been around for decades. Prof. Cube’s Schooldays tells us about the childhood of Frankie Stein’s creator and is interesting because it features Professor Cube’s Mom and Dad. I have seen strips involving Prof. Cube’s ancestors and contemporary relatives, but never his parents, so the instalment is quite remarkable in this respect, never mind the quality of the art. The story suggests that Prof. Cube would probably be in as much trouble without having created Frankie because he has always had a knack for destruction and causing havoc with his mad inventions… 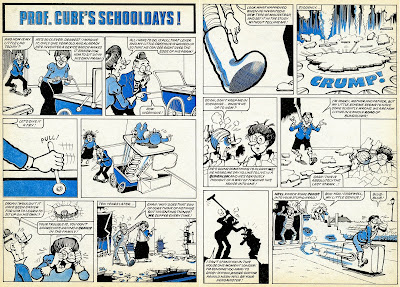 Professor Cube’s parents are not the only close family that we meet in this 1979 SHIVER AND SHAKE Annual.  In Frankie Stein, Professor’s sister Mildred has come to stay over Christmas.  She is kindly disposed towards Frankie at first and can’t understand why her brother wants to get rid of him. Before long, she is completely on board with Prof. Cube, devising violent schemes to do away with the ‘big tin twit’. Here is the second part of the two-part instalment from the Annual: 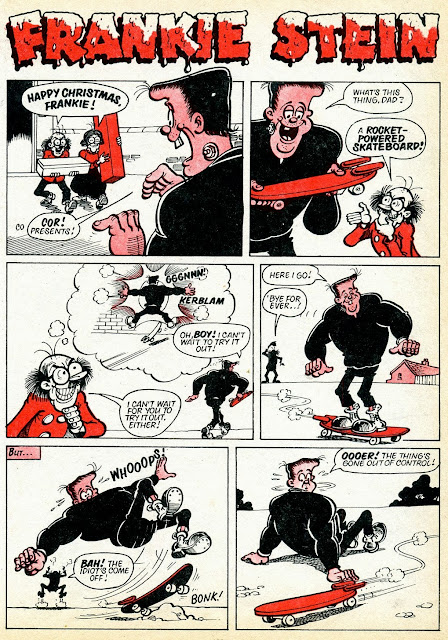 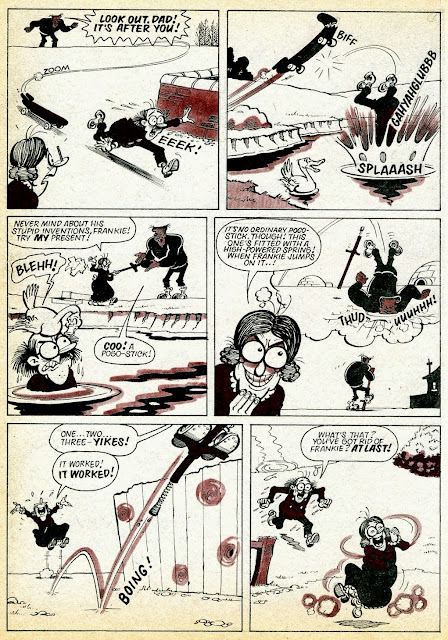 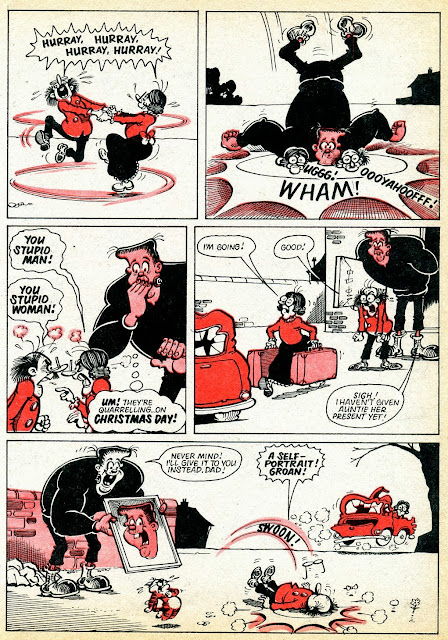