COR-Medy Choice feature was introduced in the issue dated 21st April, 1973 (No. 151) to give readers an opportunity of selecting a new fun-series from ten brand new comedy ideas presented over a period of ten weeks. Here is how the idea was packaged in the header and the footer of the weekly instalments:

Here are brief synopses and the opening panels of all ten entries:

The Fun-Time Machine, 2 pages, 21st April, 1973, issue No. 151: Boy and girl use a Fun-Time Machine invented by their Grandfather. They travel to Roman times and find themselves in the middle of a Roman arena facing a gladiator. They cause mayhem in the arena and return home safely. Illustrated by by Les Barton: 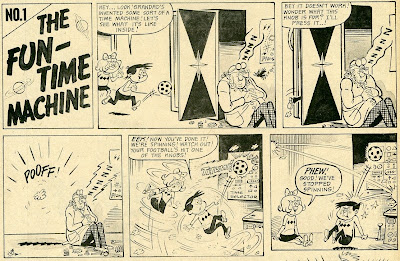 Scarey Crow, 2 pages, 28th April, 1973, issue No. 152: A crow is sick and tired of people trying to scare his kind with scarecrows, etc., so he decides to give humans a taste of their own medicine. His first attempt fails but he declares he is not done scaring humans yet... Illustrated by Terry Bave: 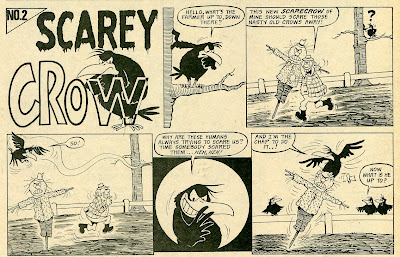 Seymore Son of Tarzan, 2 pages, 5th May, 1973, issue No. 153: Seymore who is a fat bald kid tries to build a new do-it-yourself tree house together with his assistants – a dumb-looking ape Cyril and an exotic animal that most probably is a wild boar; the effort involves a series of accidents and ends in destruction of the tree house and the tree. Illustrated by Stan McMurtry: 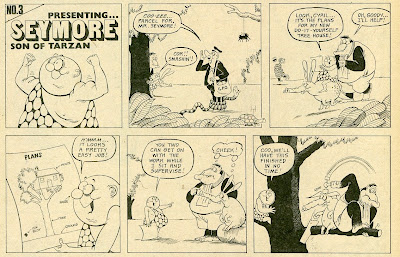 Val's Vanishing Cream, 2 pages, 12th May, 1973 , issue No. 154: Val finds a jar of vanishing cream in the bag of old cosmetics that her Mom asks her to pop in the bin. Val uses it well: she makes the teacher’s cane vanish and class is over without a single caning. Illustrated by Mike Lacey: 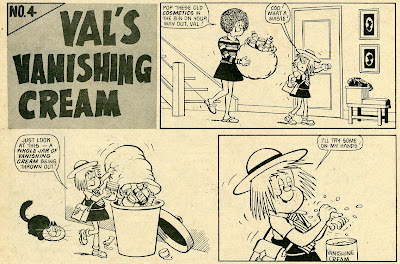 Snappy Sam and Flash Harry, 2 pages, 19th May, 1973, issue No. 155:  Snappy Sammy and Flash Harry are cameramen working for two competing papers – Morning Piffle and Daily Bilge. Sammy is a bespectacled kid and Harry is an evil grown-up who plays tricks on his rival and interferes with his job; in this episode they both have an assignment to take some pictures of a famous football player. Illustrated by Graham Allen: 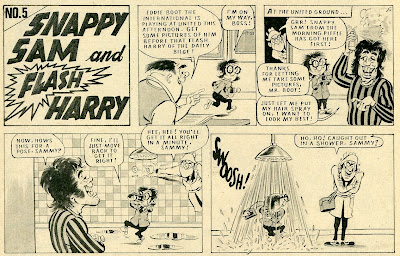 Sheik Oleg, 2 pages, 26th May, 1973, issue No. 156: Sheik Oleg is a fat and short bloke who walks around with a pet – a strange rodent. He buys an old camel from Cyril Swindle (used camels salesman who looks a lot like Grimly Feendish) so that he can ride home in style; the camel immediately goes missing  and Sheik Oleg goes looking for it in a rubbish dump. He then takes the ponging camel to a camel wash but gets scrubbed himself instead. Illustrated by Stan McMurtry: 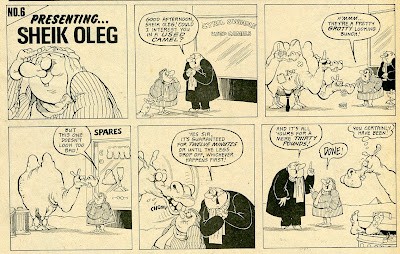 My Old Man's A Junkman, 2 pages, 2nd June, 1973, issue No. 157: Dusty Binn, Rag and Bone merchant, and his son Rusty live at the end of the posh Ritzy Avenue and run a scrap business to the great dissatisfaction of their wealthy neighbours. I don't know who the illustrator was. Any suggestions, please? 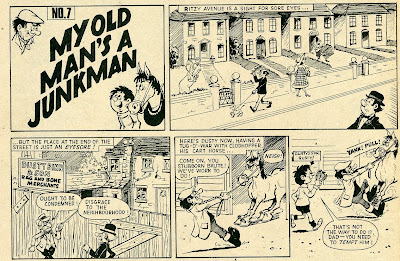 Professor Potty and Son, 2 pages, 9th June, 1973, issue No. 158: Professor Potty is a crazy scientist (who looks a lot like an older and bald version of Valiant’s Billy Bunter) tries to prove that well-accepted theories are wrong. In this episode he challenges two theories: the one that elephants don’t forget, and the one that sound vibrations can shatter things. Illustrated by Les Barton: 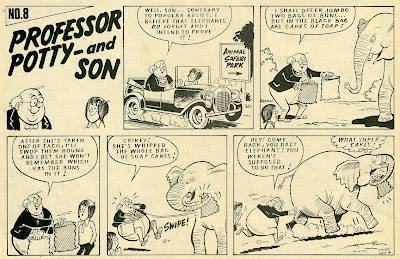 Doctor Quackpot, 1 page, 16th June, 1973, issue No. 159: A tale about a daft doctor who receives weird patients. In this episode the patient is a guy with a cowboy hat only he is not a cowboy. He uses the hat to cover his hair because he suffers from multiple dandruff. The whole room gets filled up with dandruff in a few moments and Dr. Quackpot calls his mate Vet for assistance. The Vet who appears to be just as daft brings penguins along so that they can enjoy themselves in the “snow”… Illustrated by Tony Goffe: 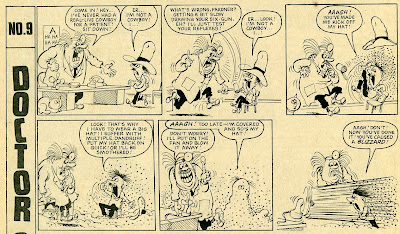 The Pipes of Stan, 1 page, 23rd June, 1973, issue No. 160: Stan has a pipe which turns people to stone while the second blow brings them back to their selves and so forth any number of times. This again looks like the work of Tony Goffe to me: 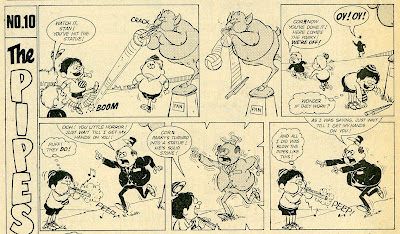 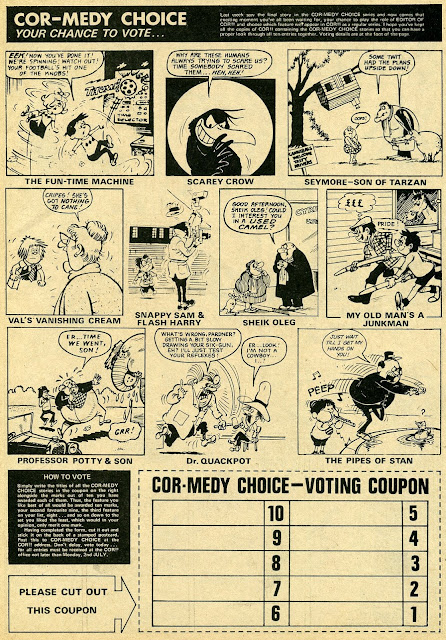 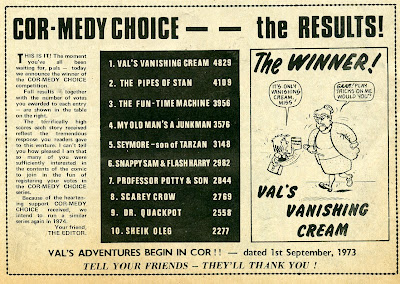 Stoneage Brit Ancient Nit was a short-lived series in the vein of the Flintstones telling adventures of a little pre-historic kid. Weekly antics involved mammoths, dinosaurs, etc. Stoneage Brit had an enemy named Ug who was an ape-like club-wielding brute.  The feature was quite similar to Glugg - a strip that appeared in WHAM! in the 60s. One of the things that Stoneage Brit had in common with Glugg was his turn for innovation and invention

The artwork was rather crude – perhaps appropriately for a strip about pre-historic times.  Stoneage Brit Ancient Nit lasted until 7th November, 1970 (issue No. 23) and missed a couple of weeks towards the end of its modest run (it did not appear on 26th September, 1970 and 10th October, 1970 (issue Nos. 17 and 19)). It was hardly missed by many when it disappeared from the pages of COR!!


Thanks to Niblet who referred me to the appropriate post on another blog (see comments below), I can now add that the illustrator was Tony Goffe.

And now I’ll take a deep breath before the next batch of three or four posts that I plan to devote to one of the most exciting COR!! strips - Kid Chameleon…
Posted by Irmantas at 7:11 PM 4 comments: