A LOOK AT COR!! STRIPS: HIRE A HORROR


Hire a Horror was another long-running strip that continued throughout the entire run of COR!! Late 60s and early 70s saw the rise of comedy horror genre in British comics and Hire a Horror is a perfect example. The weekly one-pager was named after an agency that hired out all sorts of monsters to all kinds of clients who wanted them for various personal reasons. Customers’ schemes frequently backfired. The horrors occasionally fell victim to their own terror plots when things didn’t go as planned. Except for its services, the agency was a normal company in every respect: it had an office with a sign, a casual daily routine, a miserly boss and a gorgeous receptionist, a pool of secretaries, a cashier and a team of workers who sometimes grumbled about pay. The strip survived until the demise of COR!! and would have probably made it to the combined BUSTER AND COR!! but due to the similarity of the theme the editors had to choose between Hire a Horror and Rent A Ghost (an old-timer in BUSTER) and their decision was in favour of the latter. 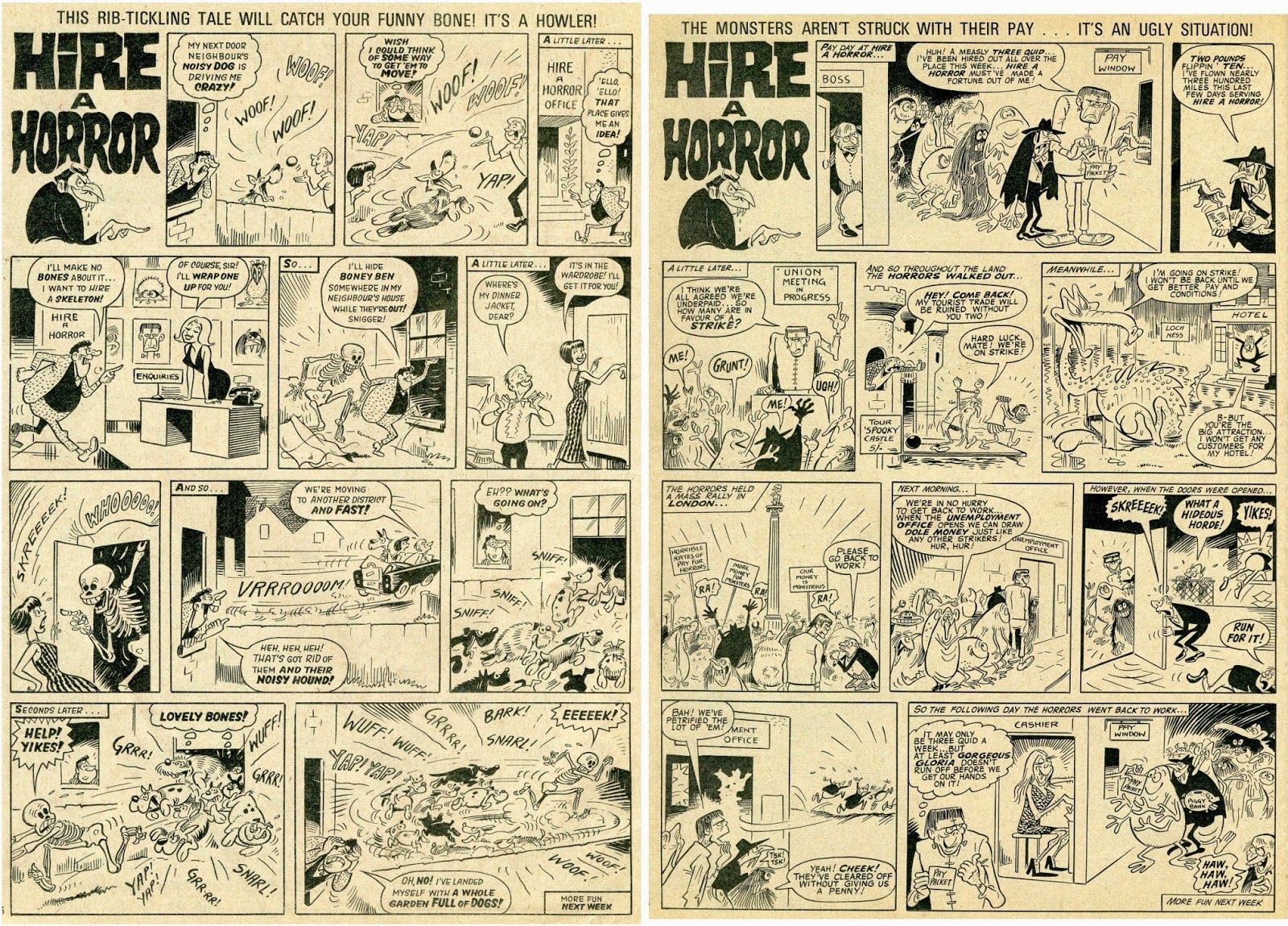 Reg Parlett was the regular artist who worked on the strip until the issue of 8th April, 1972 (issue No. 97). All of his sets were in black and white. Starting from the issue dated 15th April, 1972 (No. 98) Reg Parlett was permanently replaced by Robert Nixon and Hire a Horror became a full-colour feature (with the odd b/w episode). In his interview in the Winter 1981 edition of GOLDEN FUN Robert Nixon recalls that Hire a Horror was his first IPC work after he quit DC Thomson and began to work for IPC exclusively. The first episode of the strip by Bob Nixon (in b/w) was in COR!! 29th January, 1972 (No. 87). 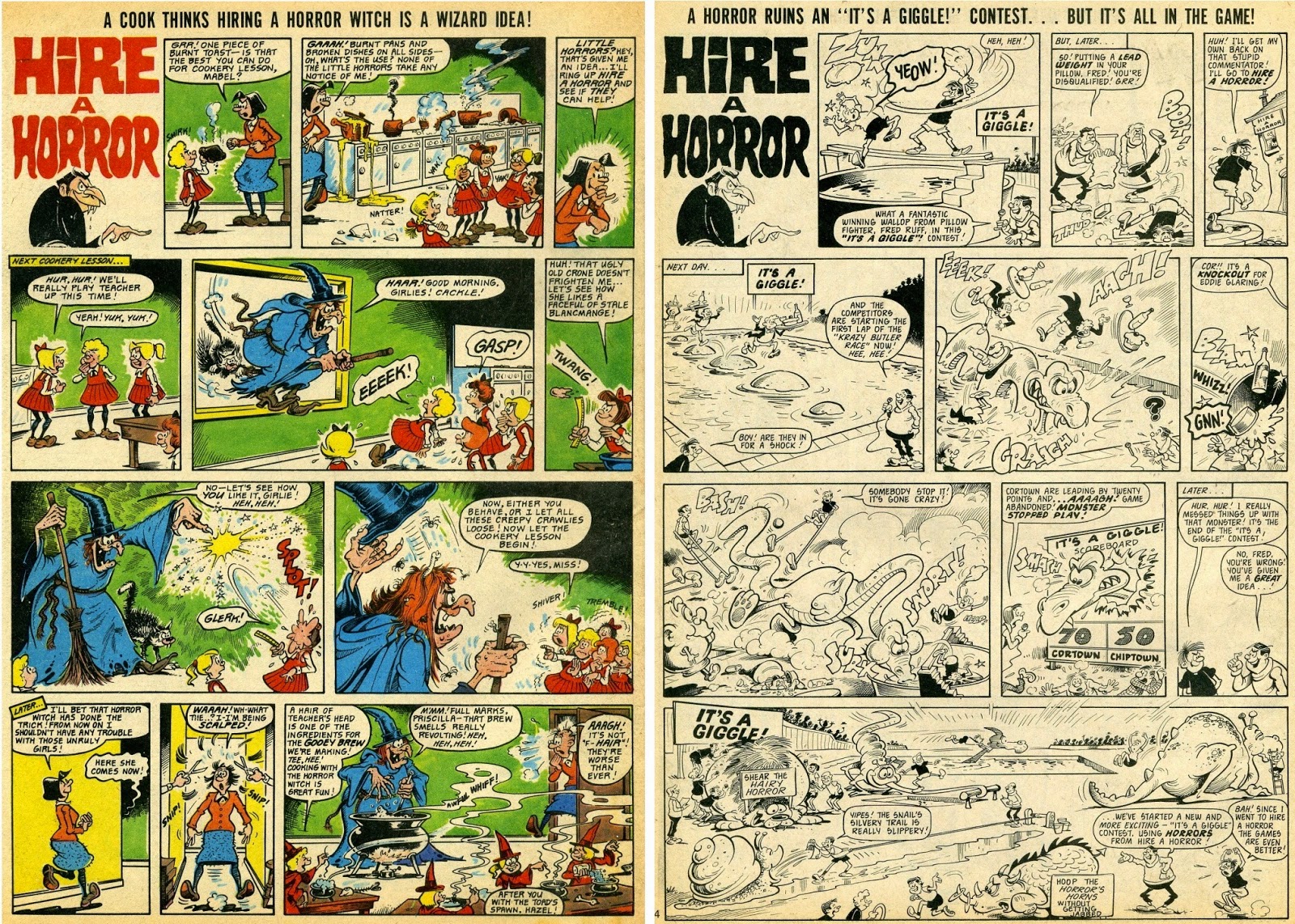 It’s interesting to note that as the comedy horror genre grew more popular, a number of ideas used in weekly Hire a Horror episodes were later developed into regular features for other IPC comics. Hideous Hole that appeared in COR!! issue of 17th October, 1970 (No. 20) later became ‘Orrible Hole in Whoopee! and Monster Hhand from COR!! dated 27th November, 1971 (No. 78) was developed into The Hand in Shiver and Shake. An attentive COR!! reader wrote in to tell the Editor that at the beginning of the tale the hand was a left hand, while in all other frames in was a right (I took the trouble to check and found out that it was actually the other way round – first right, then left…). 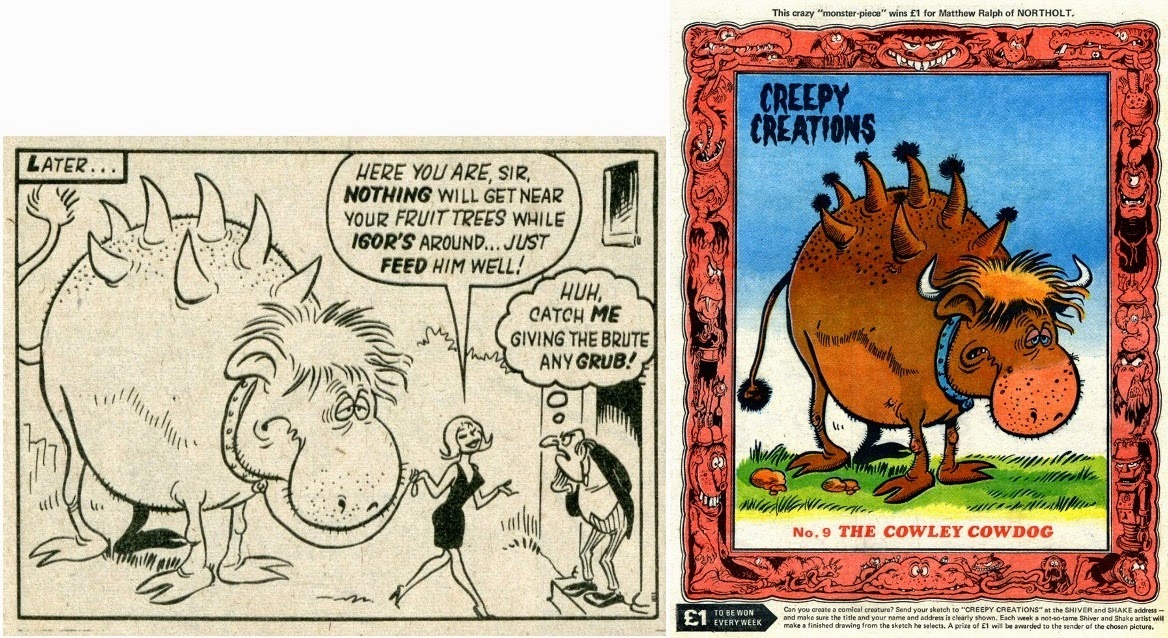 As I was preparing to start this blog, I accidentally bumped into a piece of Reg Parlett’s original Hire a Horror artwork on eBay and couldn’t resist bidding on it. In his interview for the Winter 1979 edition of Golden Fun Reg Parlett told Alan Clark that his favourite materials were half and half – a heavy fashion board. He said he preferred this kind of board for two reasons – the first being that it was easier to work on and allowed a lot of errors to be corrected easily, and secondly because it was easier for packing when he sent work to IPC. The two photos below show the artwork beside the printed page in the paper (the original is 4 times the size of the comic) and the back of one of the halves with the issue number and date marked. Note the hand-written text and corrections of the caption. I have also scanned a couple of frames so that you can appreciate the linework close-up. Marvellous! 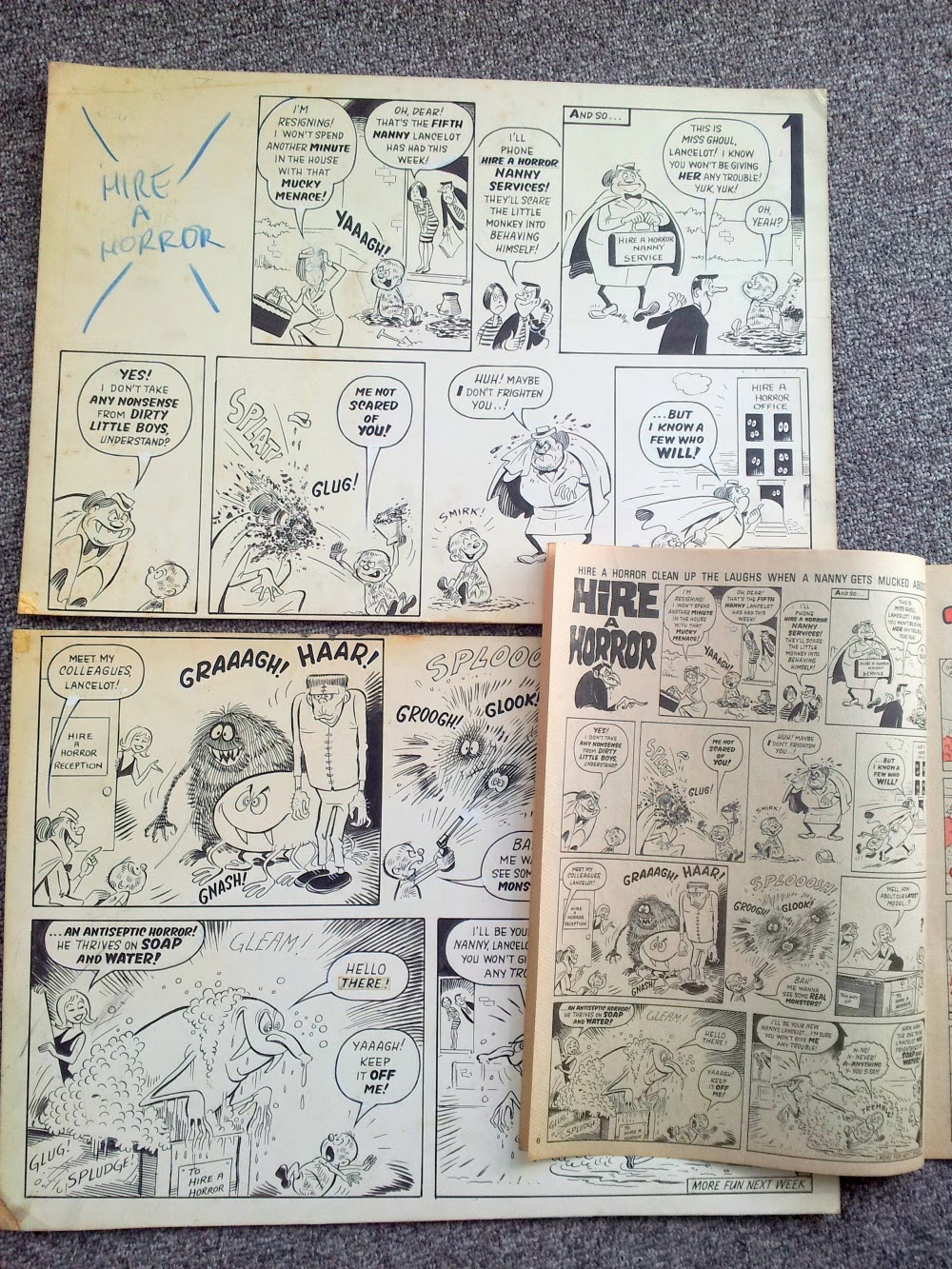 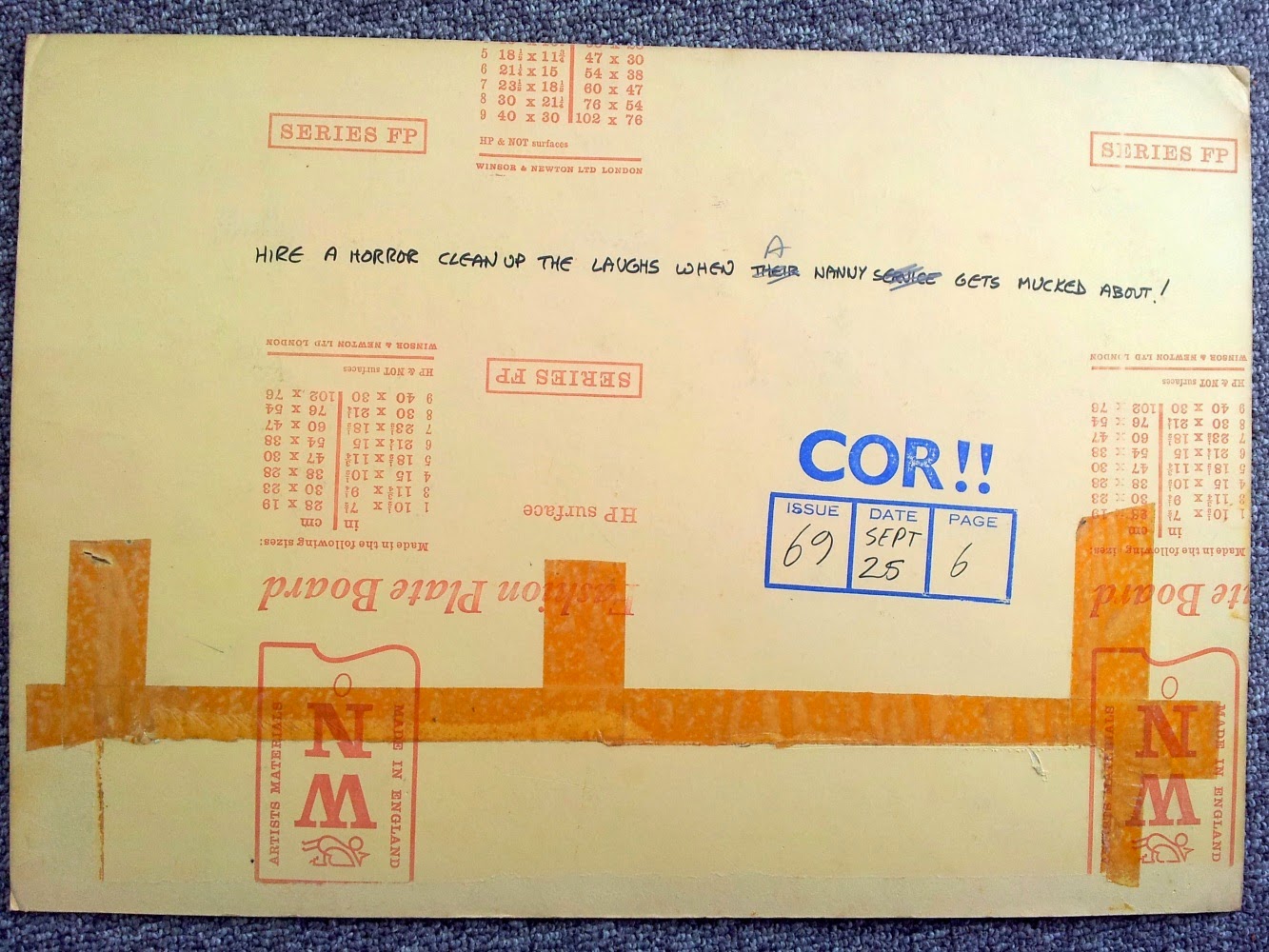 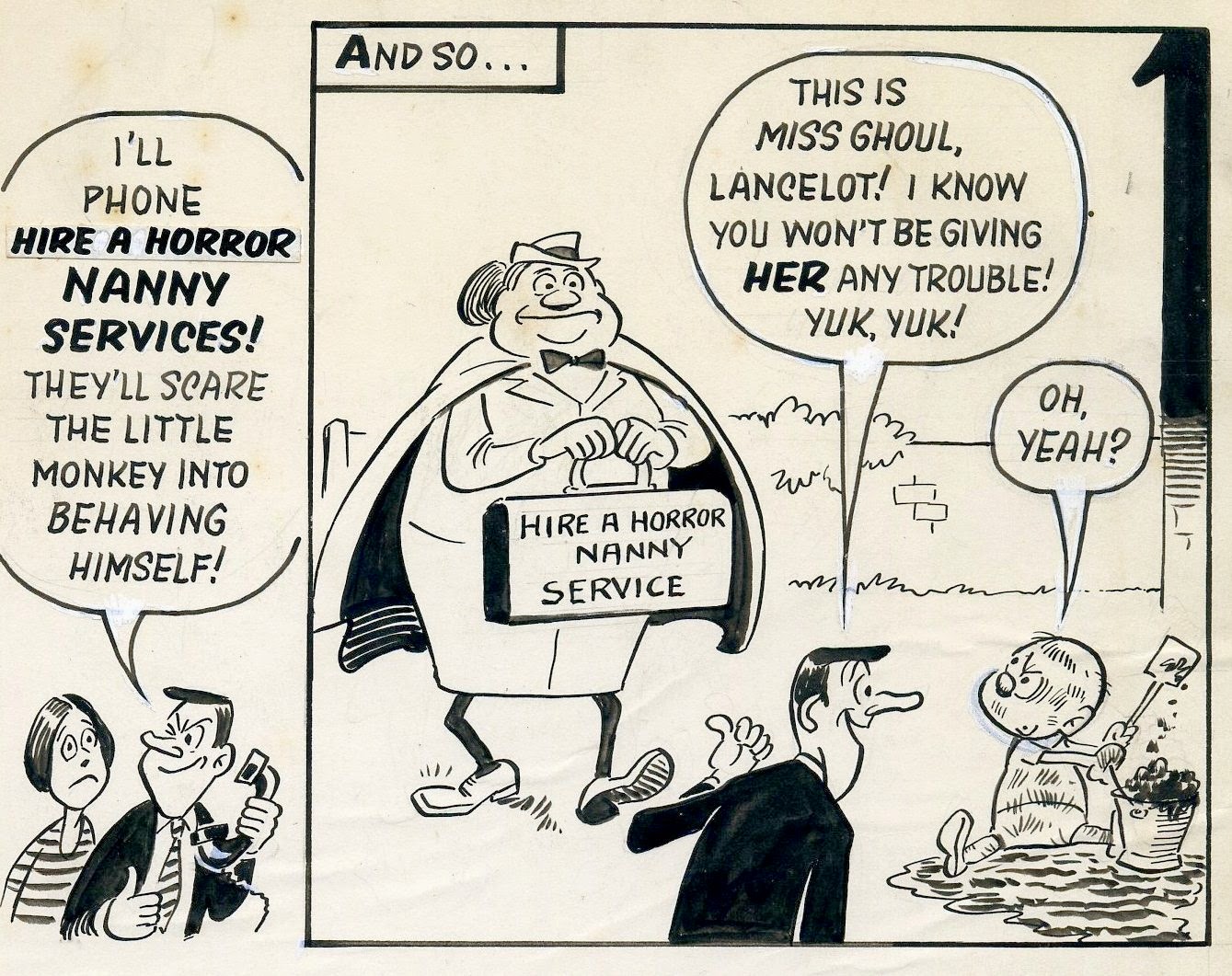 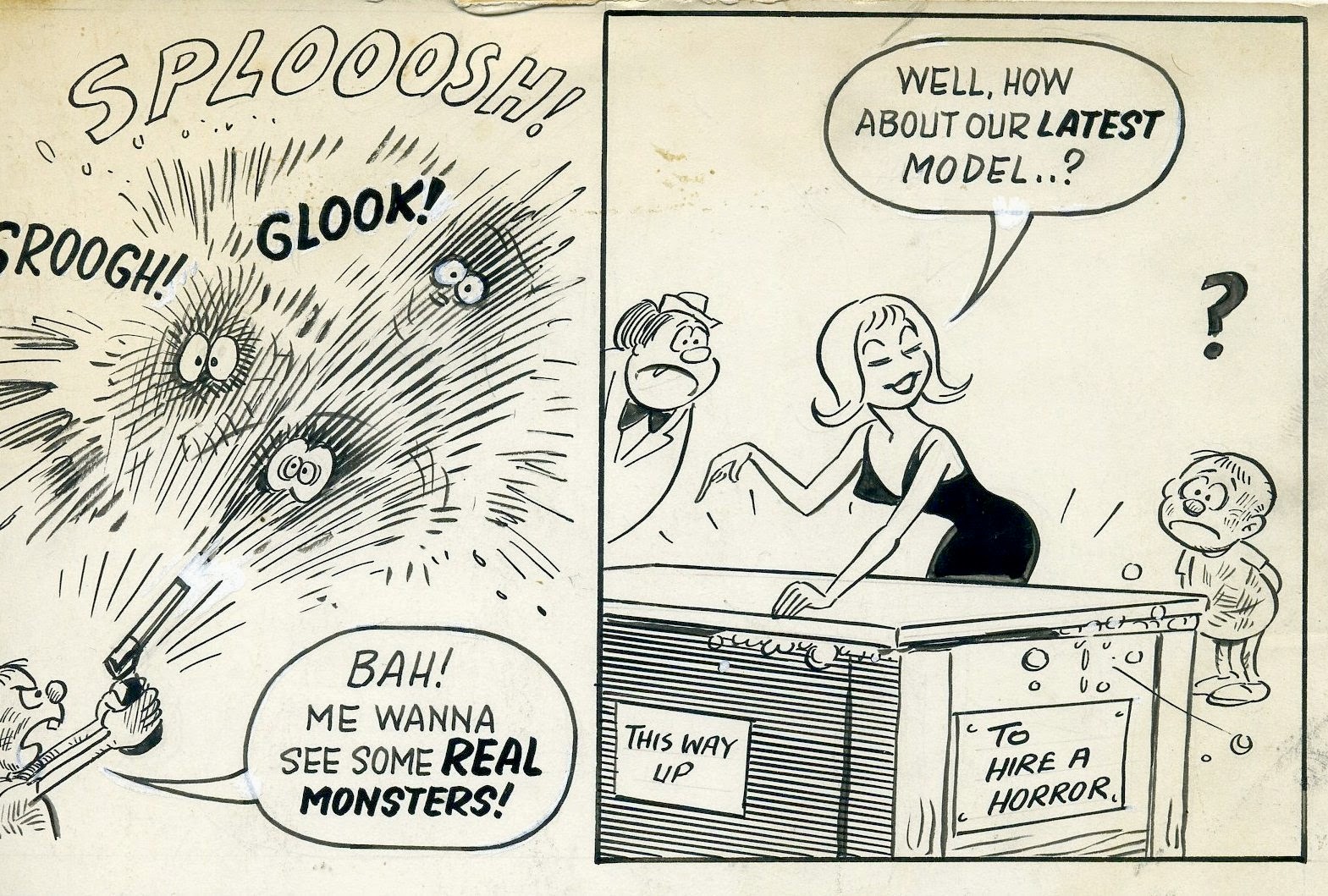 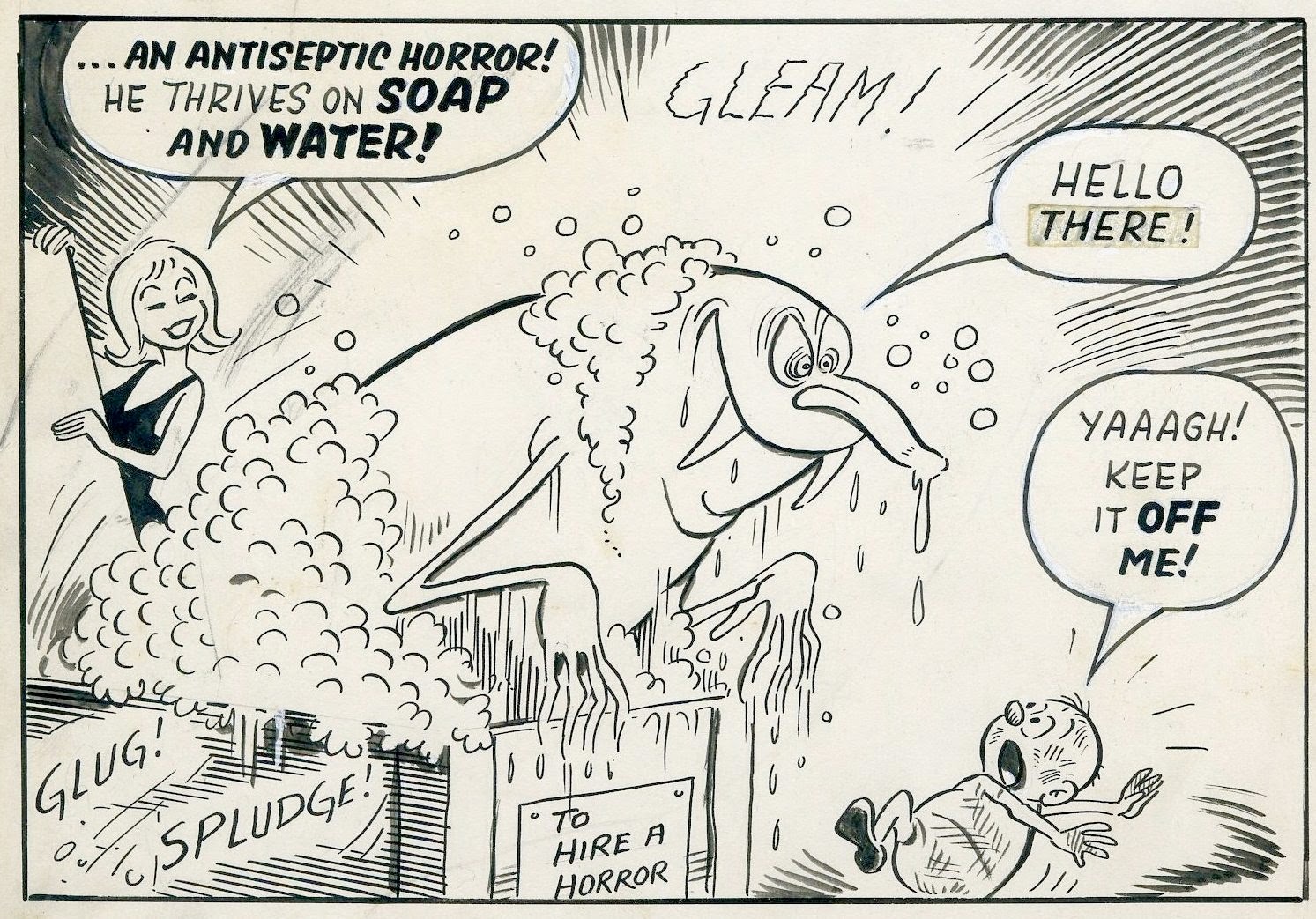 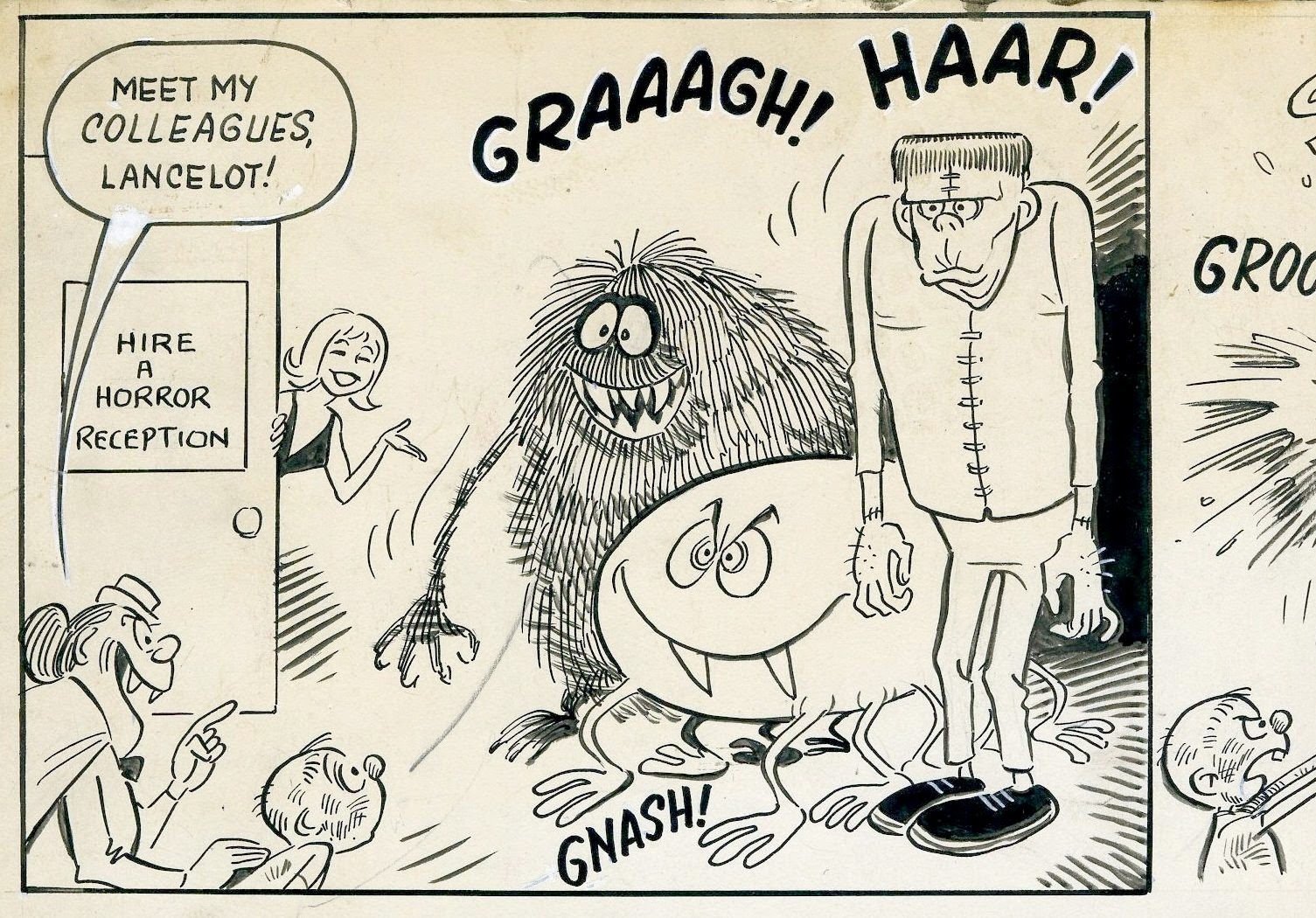