Kid Chameleon beats a Gang of Child Kidnappers (13 weeks from 3rd July, 1971 until 25th September, 1971, issue Nos. 57 – 69)
By now Kid Chameleon has reached the outskirts of a big industrial town in East Africa. He tries to seek shelter from a dust storm and ends up on board a cargo airplane. Kid resists the pilots’ efforts to seize the stowaway. In the course of the fight the boy tumbles on the instruments panel and smashes half of it to pieces. The plane crash-lands in Egypt and Kid loses his pursuers by climbing over a wall of a posh oriental residence. He meets Musti Fatah, owner of the house. Upon hearing that the intruder is wanted by authorities for running off after the plane crash, Musti Fatah realises that Kid’s presence endangers his own plans. To prevent his house from being searched, the wealthy merchant decides to hand Kid over to the authorities and throws him into his dungeon. There Kid finds himself in the company of an Arab boy who is held captive. The boy’s name is Ali Hassan, he is son of a wealthy Bedouin Sheik. Ali tells Kid that Musti Fatah plans to take him across the desert to Cairo and demand a high ransom. Fatah overhears them talking and realises that Kid now knows the truth and has to be disposed of as soon as they reach the desert. The thugs roll the boys up in carpets and load them onto camels. The lizard boy manages to escape and follows the caravan at safe distance in order to try and rescue Ali. He suffers an accident and is picked up by some Bedouin camel riders led by Sheikh Hassan, father of Ali. Kid tells him about the trouble that his son is in and the Bedouins ride towards the oasis of El Kabir to look for the snivelling snake-eyed merchant Fatah, unaware that he and his men had dug a deadly trap for any unwanted pursuers.  A fight breaks out. Fatah escapes carrying Ali away with him: 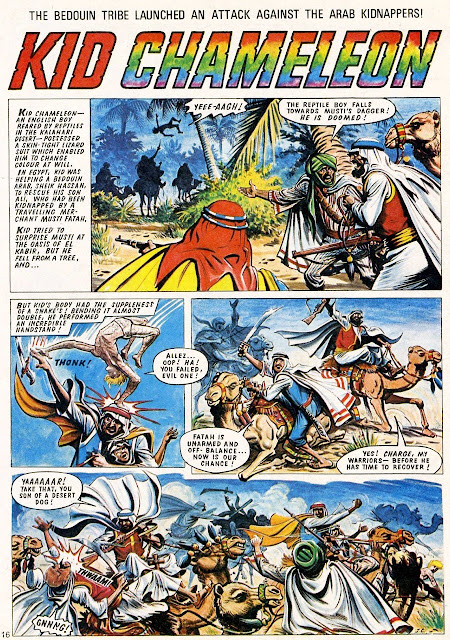 The Sheikh is prepared to yield to the black-hearted merchant’s demands for a ransom of two million piasters for Ali’s safe return but Kid Chameleon thinks of a clever plan and finally foils the kidnapper’s evil plot assisted by his reptilian friends. The Sheikh reunites with his son and Bedouins capture the merchant who will now meet the justice that he deserves. Kid continues his long and wearying quest for the man who shot his parents.

Kid Chameleon helps American Oilmen Deal with Arab Terrorist Rebels (7 weeks from 2nd October, 1971 until 13th November, 1971, issue Nos. 70 - 76)
Kid is now in Egypt, walking along an oil pipeline that runs along the river Nile. Suddenly he is seized by some jeep-riding angry American “lily-skins”. The Americans tell him that for months now a bunch of rebels has been sabotaging their rigs and pipelines and they believe that Kid is one of them. Kid realises he is being blamed wrongly. The lizard boy uses his talents and makes a rough escape. As the oilmen drive off, their jeep gets bombed. Kid rushes to the scene and sees two men with guns who are going to finish the Americans off. Kid intervenes and the would-be assassins run for their lives. An ambulance comes from the oil rig. The two oilmen accuse Kid of blowing their jeep and Kid can’t escape this time. They take him to their camp and lock him up in the paint store. A mysterious figure with a stocking mask unlocks his door and starts shooting at him with a catapult. A messy fight breaks out and Kid soon finds out that his attacker is a red-haired girl by the name of Mary-Lou McGraw who has come to get even with him for what he did to her Dad. Kid escapes from the store and takes the girl with him so that she can’t raise alarm until he is far away. Suddenly he sees the same two men who tried to kill the girl’s father breaking into the camp. Kid is going to capture them by climbing onto a derrick and dropping on them with force but it turns out that the derrick is the Arabs’ target and they blow it up: 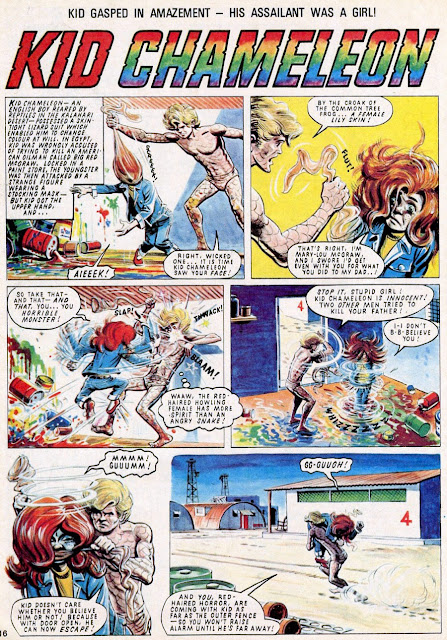 Kid’s fall is broken by water in the fractured tank. The girl sees the villainous Arabs as well and she now believes Kid's innocence. But her Dad and the other drillers who are trapped in a bunkhouse must be saved. Kid calls his lizard friends for help; they dig a tunnel under the flames and Kid wiggles into the bunkhouse where the situation is becoming desperate. The men crawl to safety through the tunnel. Mary-Lou tells them about Kid and they realise he had nothing to do with the rebels. Kid is determined to bring the terrorists to justice. He picks up the villains’ trail and soon catches up with them. The Arabs are driving to Alexandria to get some sleep. Camouflaged, Kid uses a signpost to pin the two rebels down.

Kid Chameleon’s First Encounter with the Man Who Murdered his Parents (6 weeks from 20th November, 1971 until 25th December, 1971, issue Nos. 77 – 82)
Kid is now in Alexandria, Egypt. He sees two men fighting and Kid scares the attacker off. The robbed man tells Kid that no one knows the thief’s identity but every time he strikes he leaves a strange sign as his trademark of crime. The sign is exactly like the badge of Kid’s parents’ killer. The scent leads Kid to the port where a big passenger liner is about to depart and he knows that the wicked man is on board. Kid sneaks into the liner. He realises it won’t be so easy to spot the villain in the crowd of passengers. He decides to try the dining saloon and thinks chandelier is the best vantage point. Kid burns himself on hot light bulbs, crashes down and causes a mess: 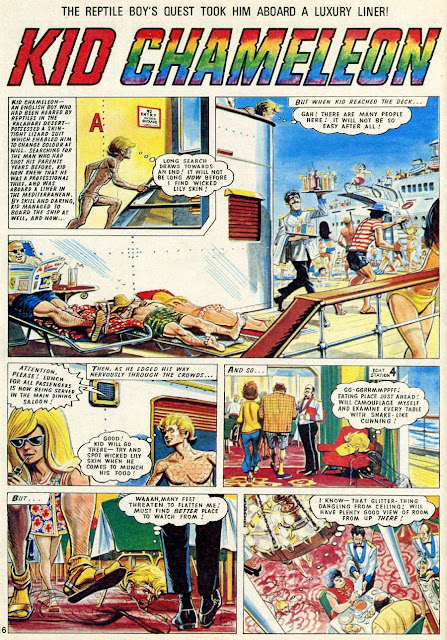 Waiters grab Kid and take him to the captain who never did like stowaways very much. Captain orders to lock Kid up until they dock in Italy. Upon arrival Italian authorities are ready to take him ashore. Suddenly Kid sees the skull and dagger emblem on the bag of one of the disembarking passengers and realises that at long last he is staring into the face of the man who had shot his parents. Kid escapes from his guards and then the dock area. Camouflaged, he runs through the streets of the city where Christmas activities are taking place but the man disappears in the crowd and the quest has to begin all over again.

The next and final post dedicated to Kid Chameleon will cover the last three stories of the saga: Kid Chameleon and the Mystery of the Old Gondola; Kid Chameleon Enters for the European Cross-Country Race and Kid Chameleon Brings the Murderer to Justice, plus two stories from the annuals.
Posted by Irmantas at 6:31 AM