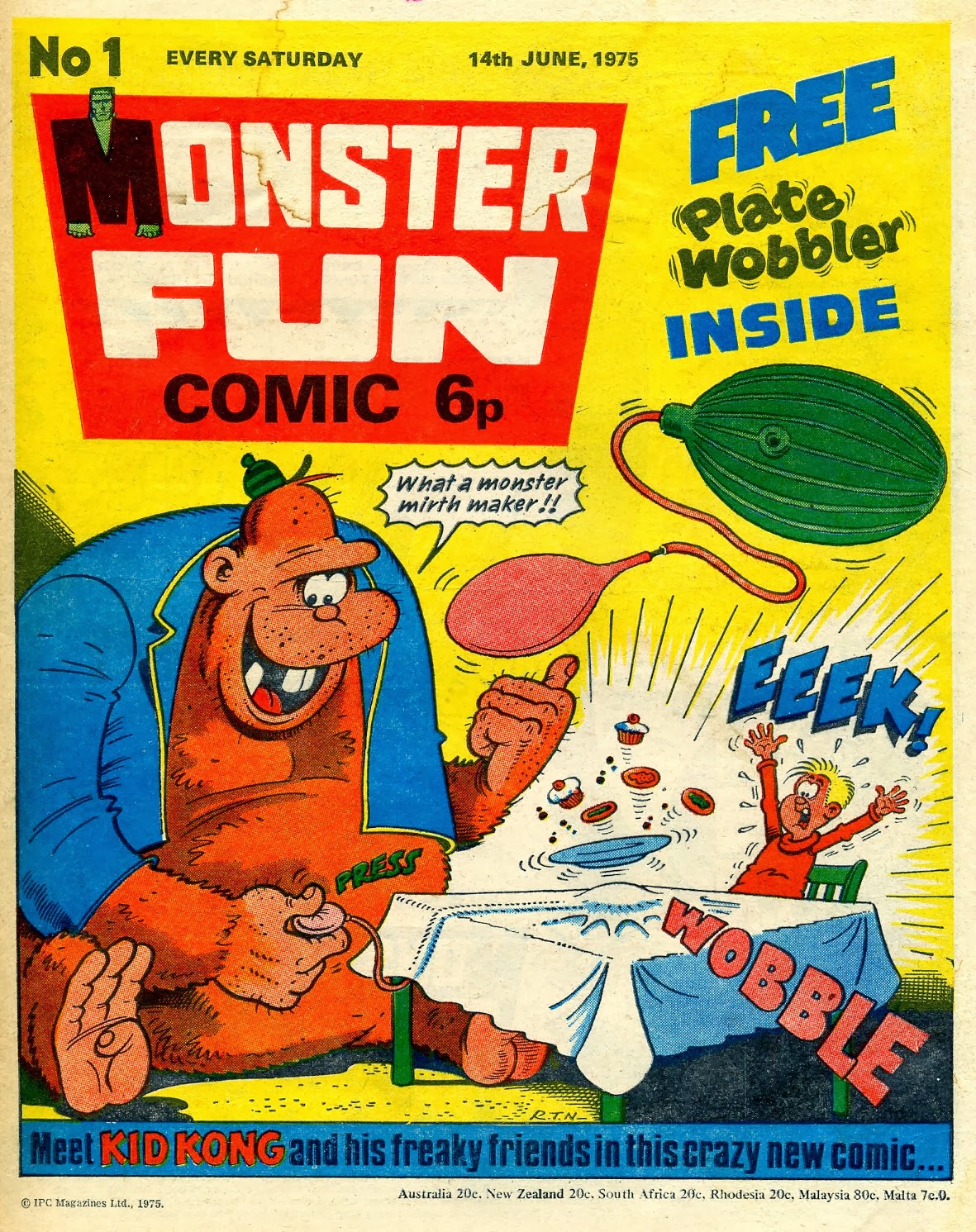 When MONSTER FUN COMIC arrived on the newsstands across the UK in the beginning of the Summer of 1975, it joined its senior IPC sisters in the children’s humour comics family, consisting at the time of Buster, Whizzer and Chips and Whoopee!     Shiver and Shake had already folded by then, as of course had COR!!

Edited by Bob Paynter, it was yet another attempt at the comedy horror genre by IPC. Shiver and Shake had played the theme half-heartedly so to speak because only a part of the comic was supposedly spooky. With MONSTER FUN COMIC, IPC went all the way and the paper was chock-full of funny horrors. Not that they were genuinely scary, of course, but monsters nonetheless – Kid Kong (banana-obsessed son of King Kong), Draculass (daughter of the infamous count of Transylvania), Creature Teacher (monstrosity manufactured by desperate teachers in a chemical lab and put in charge of the unruly class 3X), thy mysterious Invisible Monster, Martha’s Monster Make-Up, Brainy and his Monster Maker, Major Jump Horror Hunter, Tom Thumbscrew the Torturer’s Apprentice, March of the Mighty Ones (adventure serial that continued throughout the run of the paper), Terror TV, Freaky Farm, Teddy Scare, The Little Monsters and others. There were a few traditional strips too, such as X Ray Specs, Art’s Gallery, Dough Nut and Rusty (very much like Tough Nutt and Softy Centre in Shiver and Shake) and Mummy’s Boy.  The most interesting strip of the non-horror variety was probably S.O.S. (Save Our Stan) – a very clever combination of a comic strip and a puzzle, a lot like an interactive game where the main character couldn’t do without readers’ help. As is the custom on Kazoop!!, every strip will receive a dedicated post in due course.

'Honorary Editor' and host of the comic was none other than Frankie Stein the friendly monster. Thanks to Bob Nixon’s brilliant art and the efforts of IPC script-writers, the character had formed a solid fanbase in the days of SHIVER AND SHAKE during 1973 – 1974 and continued to do very well in the combined WHOOPEE! AND SHIVER AND SHAKE. That’s probably why Bob Paynter decided that putting him (notionally) in charge of the new magazine would only be good for the paper. I find it quite surprising how much of Frankie there was in MFC: in addition to contributing the odd ‘editorial’, running the Letters to Frankie section and making a few front-cover appearances, he featured regularly in Frankie’s Diary and Freaky Frankie strips and was the host of the brilliant Ticklish Allsorts feature; he even had a pull-out poster and one of the booklets was dubbed Frankie Stein’s Pull-Out Book, never mind that he did not even appear inside.

MONSTER FUN COMIC had quite a few innovative reader participation features of which Master Ugly Mug and Miss Funny Face face-pulling contest was surely the most hilarious one. Readers could embarrass themselves to their hearts’ content by sending their funniest and silliest mug shots to MFC in hope to win £2 if their picture was published.

What made MFC stand out amongst other IPC sister publications was the ceaseless supply of pull-out booklets (most notably Badtime Bedtime Books), posters, games and other things to cut out. Only a handful of the 73 issues did not have them, making the quest of building a full set of complete issues a collector’s nightmare (unless you are very lucky and win the whole run (minus only two issues) with the posters and pull-outs, and a bonus of both MFC Summer Specials, for just £31.00 on eBay, like someone did a few days ago!!).

With the large variety of pull-outs, including as many as 43 Badtime Bedtime Books (each a self-contained 8-page short-story in its own right), MFC had a surprisingly small number of strips – only 26 all in all. In comparison, the 79-issues run of another short-lived IPC comic SHIVER AND SHAKE managed 40+! The paper did not go through major revamps – any strips that were introduced or rested, came and went one by one without much ado. That said, the comic still underwent two notable developments – one was the rise and fall and rise again of Badtime Bedtime Books which had to do with Leo Baxendale’s decision to bid his farewell to comics, leaving Bob Paynter with a major challenge of finding new writers and artists to create the BBBs; the second was the drop of the adventurous practice of rotating cover stars and giving the cover permanently to Gums. Both will be covered in greater detail when I do yearly overviews of the comic in the next two posts.

The stellar team of artists who worked on MFC included two giants of UK comics – Leo Baxendale whose Badtime Bedtime Books were his swan song in comics, and Ken Reid who illustrated Martha’s Monster Make-Up. Experienced humour artists like Robert Nixon, Mike Lacey, Trevor Metcalfe, Terry Bave, Sid Burgon, Norman Mansbridge and Les Barton were also part of the team, as was Mike White who was put in charge of March of the Mighty Ones, the only adventure serial in the paper. Mr. White continued to draw it nearly until the very end of MFC when the brilliant Ron Turner took over. MFC also recruited a few young artists who later became regulars in UK comics. I am referring to Tom Paterson, Tom Williams, Jim Watson, Barrie Appleby, Nick Baker, Ian Knox and Vic Neil. There was also one artist whom I don’t recall seeing anywhere else – the name is Andy Christine, illustrator of Grizzly Bearhug… GIANT and Tom Thumbscrew the Torturer’s Apprentice (until Norman Mansbridge took over).

Well, so much for the introduction. Here are the bare facts:

Only two Monster Fun Comic Summer Specials were published (1975 and 1976). Monster Fun Annuals outlived the weekly by a good margin: the last one came out for the Christmas of 1984 and carried the date of 1985.
Posted by Irmantas at 7:43 AM