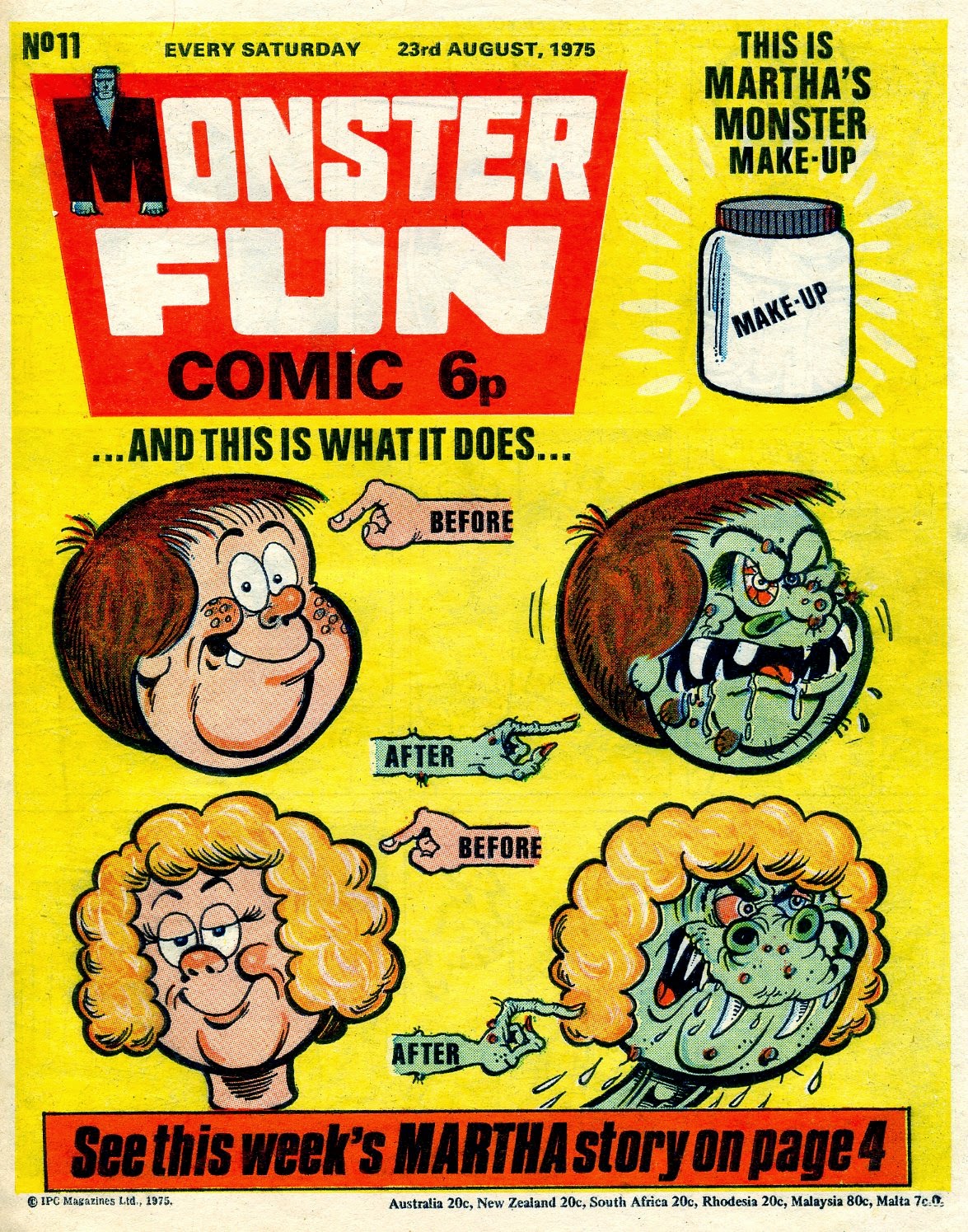 It appears that creators of Monster Fun Comic wanted as many as possible of their strips and features to have titles starting with the letter ‘M’ (to go with the title of the comic and the monster theme in general). It may be just a coincidence but IMHO Martha’s Monster Make-Up, March of the Mighty Ones, Major Jump, Brainy and his Monster Maker, Master Ugly Mug and Miss Funny Face, not to mention Monster Hits and Invisible Monster, make a lot of M's for a comic with a relatively small number of strips.

Martha’s Monster Make-up was a strip about a girl whose Dad was a caretaker at Mallet Horror Films Studios. He gave her a jar of make-up that he found sweeping one of the dressing rooms. Martha soon realised it was a special “monster” make-up that transformed people’s faces, hair and limbs into something monstrous. Luckily, the effect of the make-up was only temporary and didn’t take long to wear-off. The illustrator of the strip was the excellent Ken Reid who was also drawing Faceache in Buster at the same time. Initially Martha’s face –pulling antics were a lot like Faceache’s in the sister publication. Differently from Faceache whose ‘scrunging’ didn't go beyond his own face and body, Martha’s cream worked on other people too. 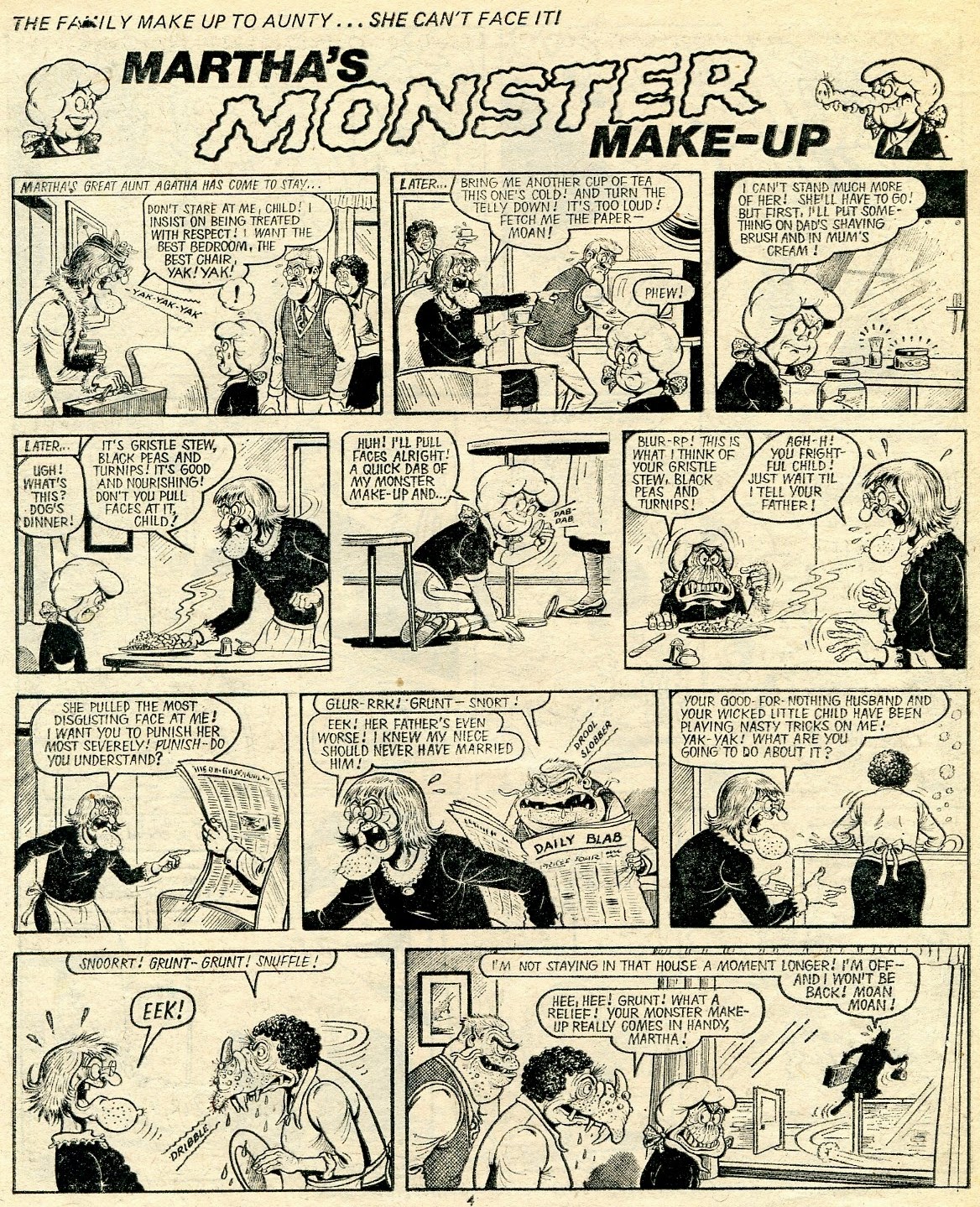 Whoever was the writer of Martha’s Monster Make-up, he soon realised that the two features were becoming very similar so he left humans alone and gave the strip a new twist by focusing on objects. A few weeks into the run Martha started using her cream to ‘monstrify’ all kinds of things, including a sculpture, a bicycle, a X-mas tree, a brick wall, a car, an umbrella, a mirror, a piano, a grandfather clock – the list goes on and on. Some of the weirder things she transformed included wallpaper, scaffolding, golf course green and even a sea wave. The reason she did this was to teach meanies and bullies a lesson and have some fun at their expense. Drawing those sour-faced unpleasant types with a bad attitude was one of Ken Reid’s specialties so it was good for Martha that her small jar contained a never-ending supply of the cream. 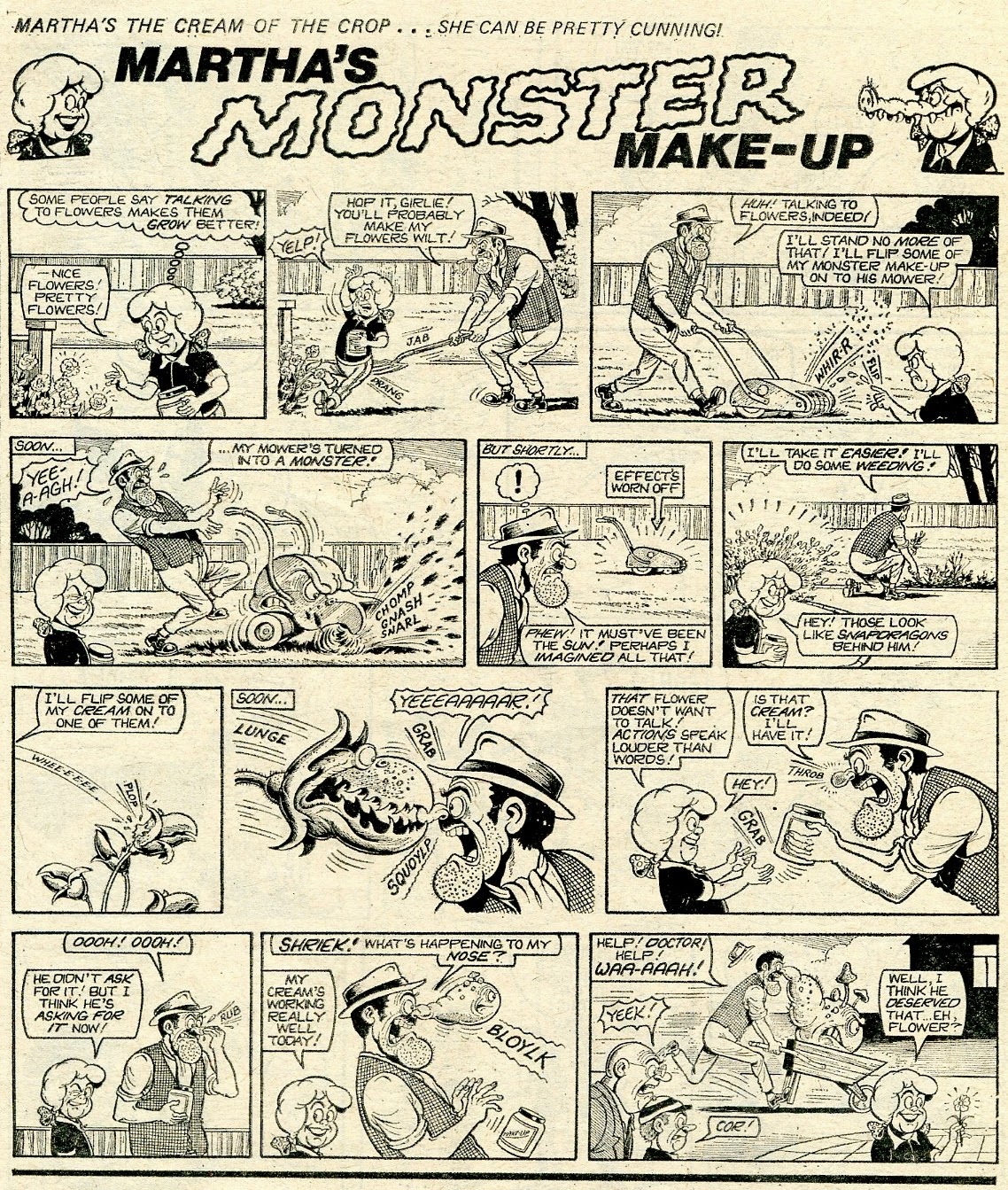 Martha’s Monster Make-up started in the first issue and didn’t miss a single week. As I mentioned it before, the illustrator was Ken Reid (who is known to have disliked drawing female characters). Frank McDiarmid stepped in on three occasions in issues 26, 30 and 62, and the episode in No. 15 was drawn by a ghost artist whose name I don’t know but he also substituted Mr. Reid on Faceache in Buster a few times around the same time. The strip was a one-pager and had a prime slot on page 4 and later page 6. 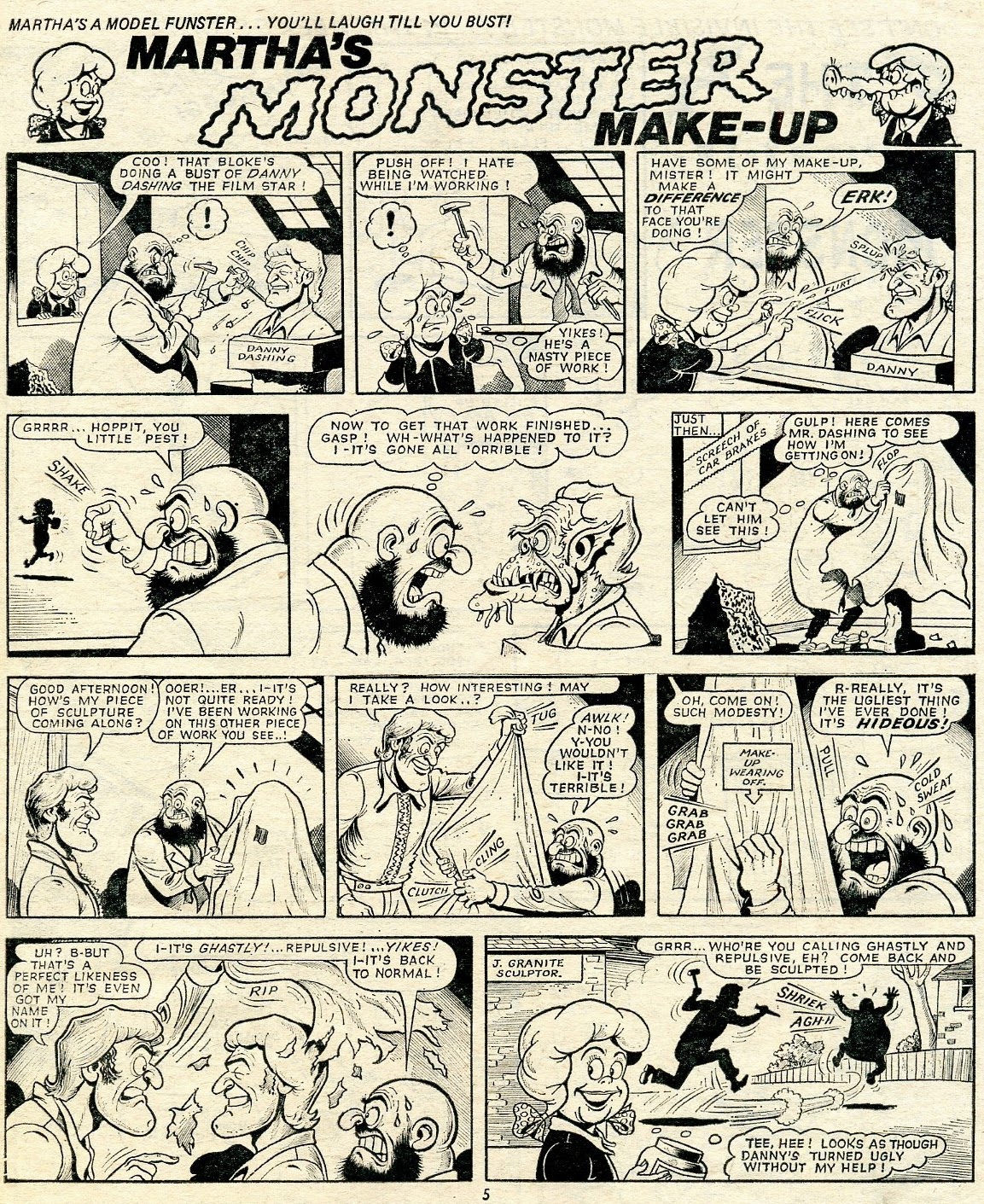 Surprisingly, Martha’s Monster Make-up survived merger with BUSTER. I say surprisingly not because it was a poor strip but because the transfer was at the expense of Faceache that IMHO was better, but was rested nontheless starting from the first combined issue of BUSTER AND MONSTER FUN. Martha’s Monster Make-up continued in the combined paper for nearly 4 months but justice was restored starting from issue dated Feb. 19th, 1977 when Faceache returned by popular demand (as confirmed by the caption under the last episode of Martha's Monster Make-up the week before).
Posted by Irmantas at 7:03 AM