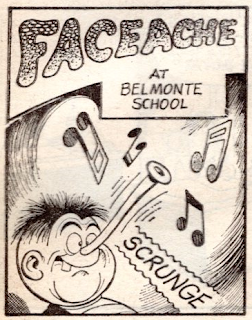 Faceache story arch No. 4 can be found in BUSTER issues for 9 and 16 September 1978. The story is drawn and written by Ken Reid.

Sanitary inspector is coming to inspect the premises and the school cellar is infested with mice. Faceache volunteers to get rid of them. He scrunges into Pied Piper, lures the mice to the moor and traps them inside a cave. 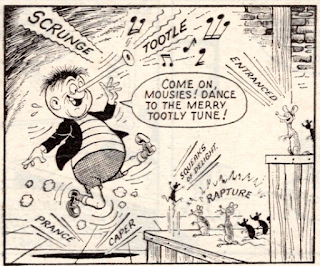 Faceache heads back to school still playing his tune that attracts attention of a plague of frogs that follows him to Belmonte school.

Faceache dances his way to Belmonte school unaware that he is luring a colony of frogs that are following his heavenly tune. Faceache gets an uncontrollable urge to follow the echo of his own tune and falls into the river... 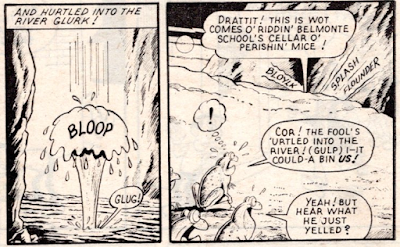 Frogs overhear him say that he has ridden Belmonte cellar of mice and rush to occupy the vacant damp cellar that is just the place for them to hibernate in. Sanitary inspector comes to inspect the premises. He says he can tolerate mice but can’t stand horrid slimy frogs. He quickly discovers that the cellar is full of the croaking creatures. Faceache scrunges into a mouse-faced kid in hope that the sanitary inspector who is fond of mice will protect him from the enraged Headmaster.

Click on the POWER PACK banner in the right-hand column and get your copy of the POWER PACK OF KEN REID - the deluxe two-volume set of Ken’s strips in WHAM!, SMASH! and POW! comics of the ‘60s.
Posted by Irmantas at 12:32 PM