The comic started as a 36-page paper, SHIVER section was 20 pages and SHAKE section – 16. Both had full colour front and back covers, there was a date and IPC copyright year on both front covers; both sections had a coupon where readers could rank their favourite features in Shiver and Shake. The spook and the elephant were always on the front page (until issue 53 dated 9th March, 1974 when Frankie Stein took over) while the back page was permanently reserved for Creepy Creations. The full-colour front page of SHAKE pull-out section featured the Shake strip; Moana Lisa and The Desert Fox took turns on the colour back page and were occasionally ousted by Mirth Shakers that shared the page with Disney Movee Cavalcade adverts. In an unlikely event if you chose to follow the instructions on the front page of SHAKE section and separate SHAKE from SHIVER by opening up staples on the centre pages, you’d indeed end up with what looked like two self-contained papers.


Strips that started in the first issue (the ones highlighted in black were in SHIVER section, while those in blue – in SHAKE pull-out):

The first three issues came with free gifts. Here is how they were advertised on the front covers of their respective issues: 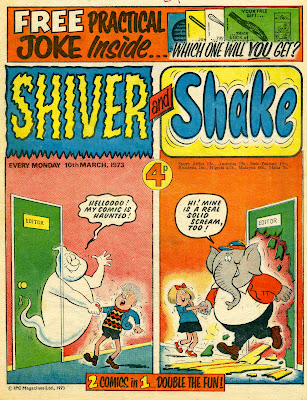 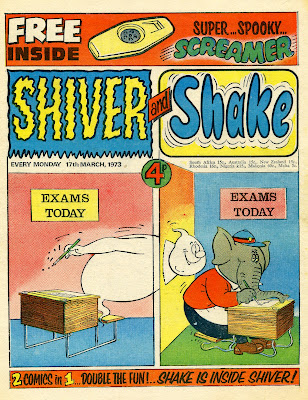 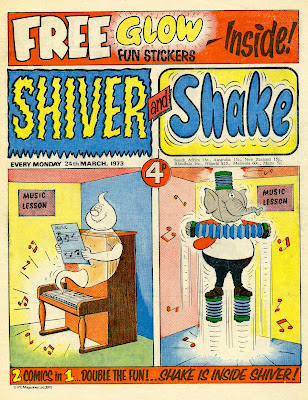 The first issue came with four different gifts. Which one will you get? – ran the question on the front cover. The original owner of my copy got the joke ‘pencil’, leaving me with an empty package... 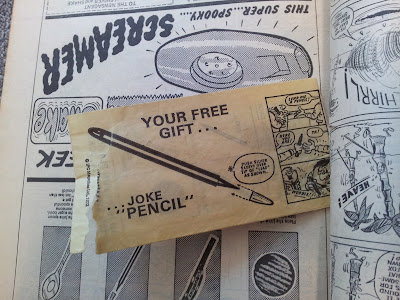 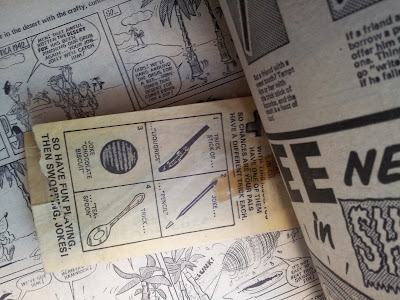 I gather from the description that a very similar freebie was offered with BUSTER dated 25th November 1997: 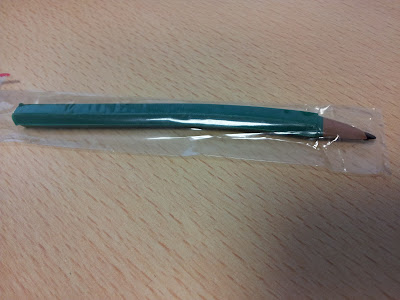 Here are instructions how to use the free gifts that came with the first and the second issues, and free gift advertisements in issues 1 and 2: 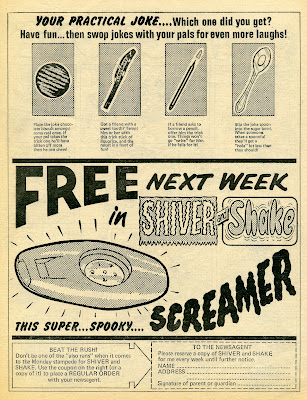 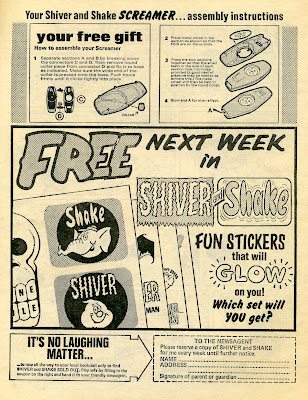 Quite a few of the strips from the first issue survived the whole run of the comic (The Duke’s Spook, The Webster, Tough Nutt and Softy Centre, The Hand and Creepy Creations). Two strips from the first issue (Moana Lisa and Horrornation Street) nearly made it to the end and ceased in the penultimate issue. Four strips outlived the home comic by a good margin, they were Frankie Stein, Scream Inn, Lolly Pop and Sweeny Toddler, all of which migrated to Whoopee! after Shiver and Shake folded in 1974. Sweeny Toddler must have been the most successful of all because it outlived Whoopee! and continued in Whizzer and Chips after 1985.

The comic didn’t have an Editor’s column like COR!! Instead, the cover stars hosted reader participation features in their respective sections: Shiver the spook had half-a-page entitled Cackles from the Cave and encouraged readers to send their entries for the cacklesome contests in his section of the paper, offering a pocket money prize for every item published: 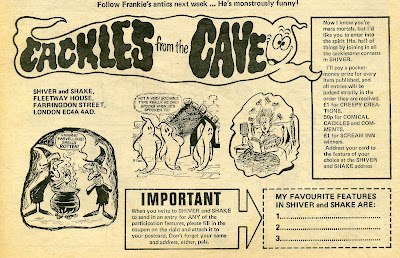 Shake the elephant had a whole page entitled Shake a Leg. He invited readers to join in all the fun features that he had in store for them in SHAKE and was also generous with his pocket money prizes. Initially the Shake page had two reader participation features. In Mirth-Shaking Inventions readers were challenged to bend their imaginations and guess the purpose of different weird objects. Answers were provided in upside-down illustrations on the same page.  The page also had Elephant Jokes (one Elephant joke always appeared on the front page of the SHAKE section). Here is the first instalment of Shake a Leg in No. 1: 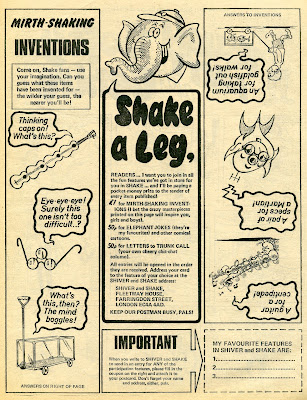 A third column of Shake a Leg called Trunk Call was added from issue No. 7 and was used to publish reader mail, one or two letters a week. Predictably, the majority of the mail was about how great the free gifts and the comic itself were and how necessary it was to place a regular order with the newsagent because it sold so quickly. One reader mentioned seeing the new comic advertised on the telly. Does anyone remember what the TV ad was like?..

The letter in the first instalment of Trunk Call had a comment that was signed by the Ed: Later the comments disappeared and resumed only in issue 21 but were made to sound as if they were  by Shake the host of the column rather than the Editor. Here is a selection of random Shake a Leg pages (the number in the corner of the coupon represents the issue number): 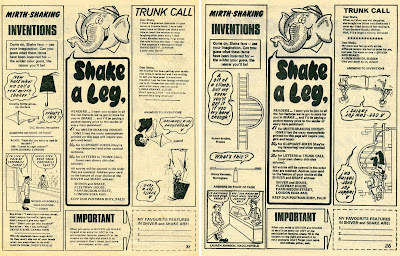 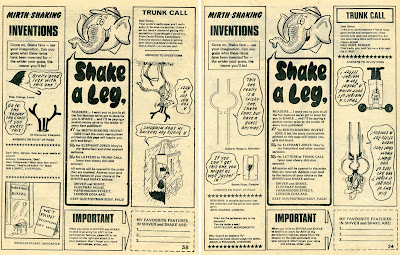 Both cover stars used their best effort to promote the comic. Shiver appeared in the ad in several issues and “a very special message from Shake” was printed in issue No. 16: 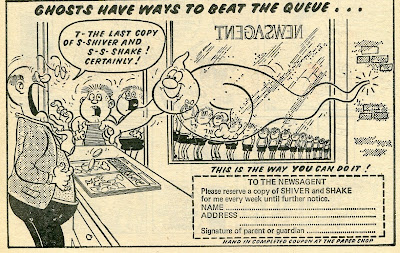 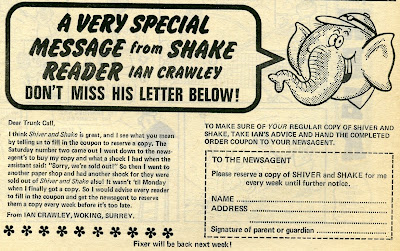 The paper may have not had an editor's column, but readers were well-familiar with the editor of SHIVER and his team because a strip called The Shiver Givers started in the 4th issue of the comic (31st March, 1973) and continued nearly to the end of the run. It featured the Editor of Shiver, Miss Nightshade the secretary and the freaks that inhabited the Shiver Office, all of whom were of course characters from Shiver section. Here is how the new feature was introduced in the 3rd issue of the paper (24th March, 1973): 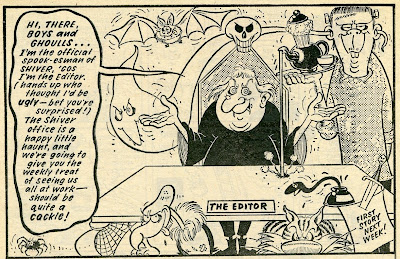 That said, I spotted two messages signed by the Editor in issues 4 and 6 (31st March, 1973 and 14th April, 1973). Presumably they were in response to letters from readers who wrote in to complain that their entries for the various competitions posted in the first weeks were ignored. 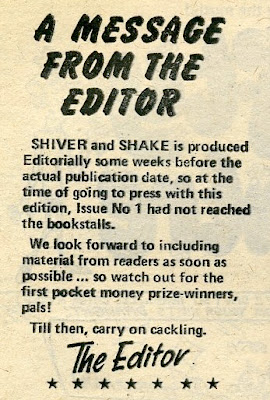 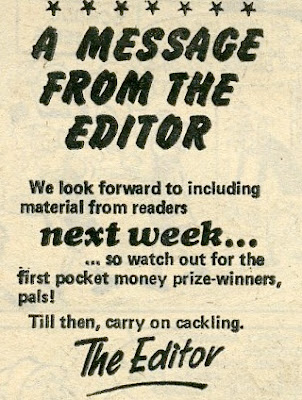 The reaction of readers to the various contests in the new comic must have been quite overwhelming. The amount of entries for the Creepy Creations contest soon prompted the editors to add a page of Creepy Creations Runners-Up offering a weekly selection of the entries that didn’t quite make it to the star-spot on the back page but fully deserved to appear in print and attract a prize of 50 p. Creepy Creations Runners Up first appeared in issue No. 7 (21st April, 1973) and continued until issue No. 47 (26th January, 1974). Here are some nice examples: 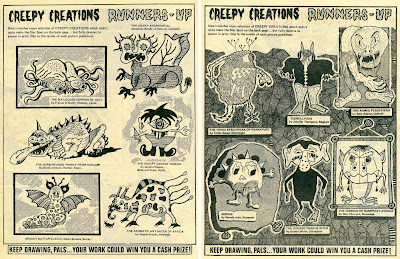 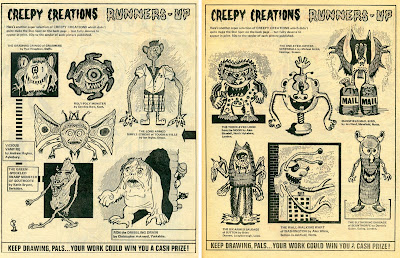 Entries for SHAKE’s Mirth Shaking Inventions contest must have also been pouring in in large numbers: EXTRA Mirth Shaking Inventions was included for the first time in issue No. 8 (28th April, 1973) and appeared semi-regulary for a few months. Another Shake feature called Mirth Shakers was added from issue No. 28 (15th September, 1973) and appeared ocasionally until No. 63 (18th May, 1974): 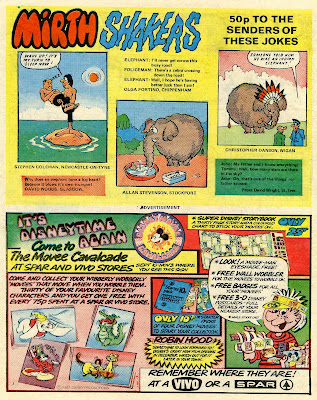 Scream Inn challenge must have stirred the strongest reaction among readers, prompting the Innkeeper to make this extraordinary statement in issue No. 13 (2nd June, 1973): 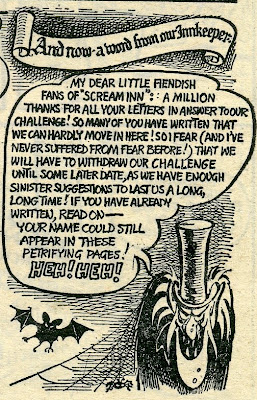 The challenge was only resumed in the first combined issue of Whoopee and Shiver and Shake some 16 months later.

Let’s take a look at the developments of the character lineup. Frankie Stein was 1 ½ pages long in the first three issues but was promoted to two full pages from issue No. 4 (31st March, 1973). The first major changes in the lineup took effect from issue No. 22 (4th August, 1973) when as many as four new strips were introduced: Ghouldilocks and Grimly Feendish replaced Adrian’s Wall and Biddy's Beastly Bloomer in SHIVER while Charlie Williams and Wizards Anonymous took the place of Gal Capone and Sample Simon in SHAKE. This is how the arrival of the 4 new features was announced in SHIVER AND SHAKE No. 21 (28th July, 1973): 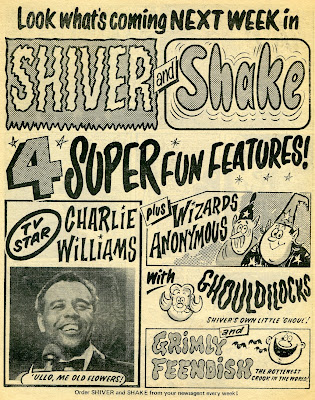 Adventure serials deserve a special mention because they were puzzles in themselves where readers were encouraged to follow the story and look for clues to solve the mystery, or plot the characters’ travels on the map to enter for a prize draw in the end.

The last thing worthwhile mentioning is the start of the Star Guest feature in issue No. 17 (30th June, 1973). Different star characters from IPC companion comics appeared in the pages of Shiver and Shake (just like Shiver and Shake stars were showcased in other comics). By then Knockout had already merged into WHIZZER AND CHIPS, so in the middle of 1973 the exchanges involved just COR!!, SHIVER AND SHAKE and WHIZZER AND CHIPS. WHOOPEE! joined in later on.

Speaking of advertisements in SHIVER AND SHAKE, they promoted developments in the life of the paper (such as the arrival of new characters or the Christmas Holiday Special), new characters/free gifts in sister publications (COR!! in particular) and important market developments, like first issues of new papers (such as Football Star or Goofy and Also Pluto) or mergers of the existing ones (Knockout and Whizzer and Chips).  Commercial ads promoted Cadbury’s chocolates, Disney movies and products, chewing gum, post stamps, Scripto colours, Chimp patches and the gold spinner from Revell.

Here is the front cover of the 1973 Christmas issue, followed by a picture of the original artwork kindly sent to me by my mate Derek who took it before selling the piece on eBay some time ago: 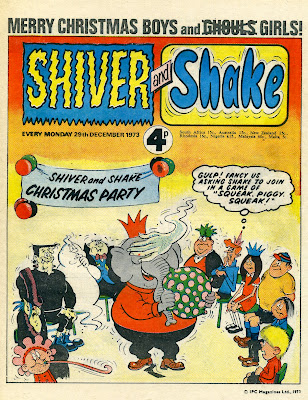 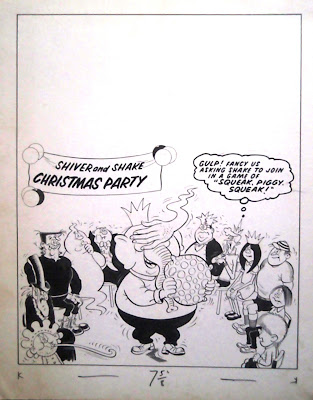 Shiver and Shake managed a special and an annual in its first year but I’ll leave them for later because this post is already way too long as it is...

Email ThisBlogThis!Share to TwitterShare to FacebookShare to Pinterest
Labels: Shiver and Shake