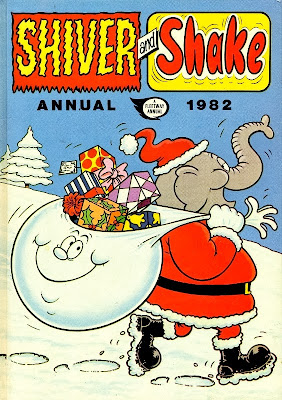 Contents: The Ghost’s Revenge (2 sets, one probably by Trevor Metcalfe and one definitely by Jim Crocker), Webster (4 sets: two by Terry Bave, one by an unknown artist and one possibly by Frank McDiarmid), The Duke’s Spook (2 sets, one by Frank McDiarmid and one by Terry Bave), Ghouldilocks (three episodes: two by Stan McMurtry and one by Tom Williams),  Lolly Pop (5 episodes: 4 by Sid Burgon (including at least one reprint) and one by Frank McDiarmid), Chupmions (3 reprints from COR!!, art by Peter Davidson), Tough Nutt and Softy Centre (3 sets by Norman Mansbridge), Shiver (by Terry Bave), Spot the Difference (3 installments with old Shiver and Shake weekly covers by Mike Lacey), Ghoul Getters Ltd. (by Trevor Metcalfe), Sports School (probably by Trevor Metcalfe), The Desert Fox (2 sets, one by Terry Bave and one by an unknown artist), Sweeny Toddler (three episodes: 1 by Tom Paterson and 2 by Paul Ailey), Moana Lisa (three episodes: 2 by Peter Davidson and 1 by Tom Williams), Frankie Stein (3 episodes: a new 5-page set by Bob Nixon, a new 2-pager by Frank McDiarmid and a reprint an episode by Bob Nixon from an early issue of WHOOPEE!), Grimly Feendish (2 sets: a reprint and one new episode by Paul Ailey), The Hand (by Terry Bave), Toby’s Timepiece (6 pages), Witch Wit (gags), Shake (2 sets, one by Mike Lacey and one by Terry Bave), Wizard Prang and Demon Druid (new by an unknown artist), Elephant Jokes by Shake (gags by Jim Crocker), The Fixer, It’s A Shivery Puzzle for You! (1 page of puzzles by Cliff Brown) Ghost Jokes by Shiver (2 pages of gags), William the Conk (8 pages, reprint from Monster Fun Comic No. 28, art by Leo Baxendale), The Great Emerald Eye of the Great Yellow God Maze! (maze by Cliff Brown), Horrornation Street (by Tom Williams), A Ghastly Ghoulish Picture Crossword! (by Cliff Brown).

It is good to see Terry Bave illustrate Webster after a longish break. All in all, Terry Bave drew 12 pages for this Annual, including some strips that he hadn’t illustrated before (at least not in the Annuals), such as the Duke’s Spook and the Hand: 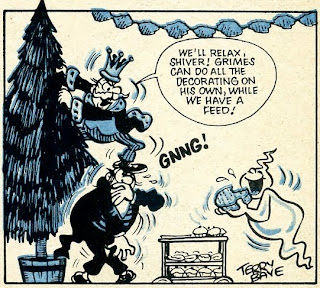 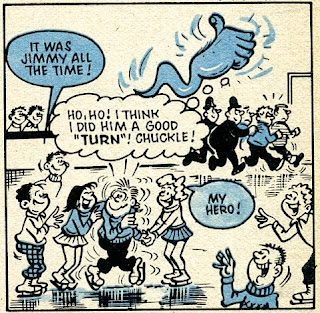 Frank McDiarmid also drew two strips that were usually given to other artists to illustrate. He contributed one set of the Duke’s Spook: 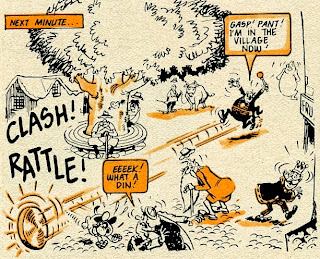 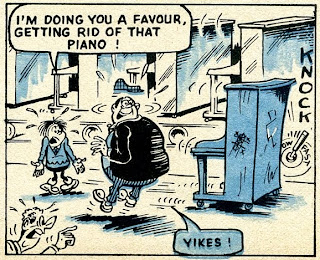 He is also responsible for one Frankie Stein tale in which Prof. Cube sends Frankie on a ‘package’ holiday packed in a box and loaded onto a submarine; sure enough, Frankie causes a lot of trouble Jonah-style: 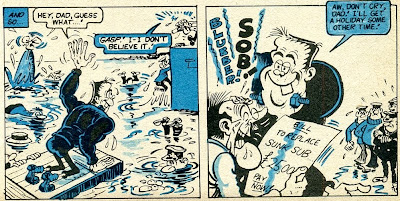 The theme of sea adventures also permeates another new Frankie Stein story in this Annual, this one by Bob Nixon whose style has changed a great deal since the days of Shiver and Shake weeklies.

In Wizard Prang and Demon Druid Wizard Prang goes carol singing but Demon Druid isn’t impressed with the racket and changes Wizard Prang into a song-bird and then back into his own self, causing him to fall and hurt himself.  Wizard Prang gets his revenge by turning Demon Druid into Rudolph the Red-Nosed Reindeer. They suffer an accident on their way back to town and Wizard Prang’s magic wand snaps off, so a bit of the spell that he cast on his fellow wizard doesn’t change back, leaving Demon Druid red-nosed for now… Can anyone identify the artist for me please? 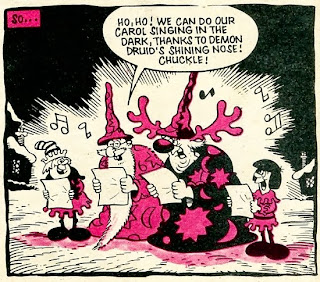 There is quite a lot of Lolly Pop in this Annual. In the first set that is definitely a reprint Archie asks Pop for a new sledge because the old tin tray that he uses has seen better days... In the second episode Archie wants to enter for a piano smashing contest with one of Dad’s old pianos. Then Archie gets a piece of a jig-saw puzzle as a Christmas present so he decides to help himself to a little toy at Pop’s factory.  In the fourth episode Pop makes Archie trim the hedge at Lolly Pop Zoo without providing him with proper tools, and finally in the fifth installment Archie asks Pop for a new cricket set, only to hear another NO. Each time Pop’s miserly treatment of his lad turns against him, costing Pop fortunes in the end. Here is one complete episode from the Annual: 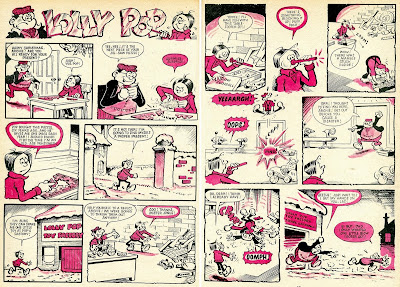 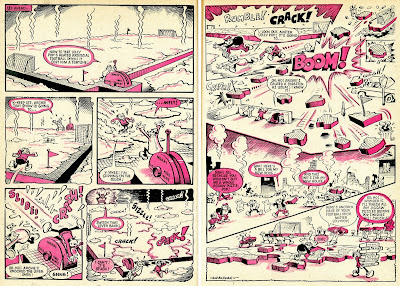 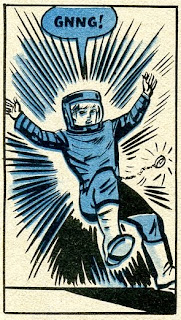 In Toby’s Timepiece Toby comes to the town store to exchange his faulty water pistol. Spoilt brat Horace ridicules Toby and shows off his ‘supah dupah’ space suit that his Mater has just bought him. Toby snaps back with a witty comment and upsets Horace’s Mother who assaults him with an umbrella… As Toby races down the stairs, he accidentally activates his magic timepiece and finds himself centuries ahead of his time. In the world of the distant future the society is divided into the haves and the have-nots, or sub-standards, who are kept in a hole awaiting deportation to another planet. Toby is thrown with them and wastes no time in freeing the lot but he is captured by guards who decide to deport him without any delay. They make him put on a space suit and hurtle him into a rocket ship but Toby activates his timepiece and returns to the town store where Horace turns green with envy at the sight of the smashing space suit that Toby is wearing…

Cliff Brown contributed three horror-themed pages of puzzles, crosswords and mazes that I think are really nice. Here are two: 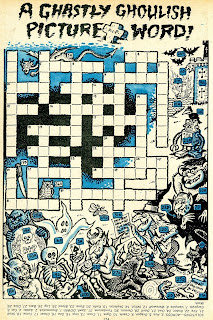 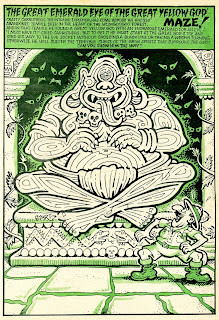 Speaking of puzzles, all three Spot the Difference puzzles in this Annual are in fact old cover illustrations of Shiver and Shake weeklies. Check out a pair side by side: 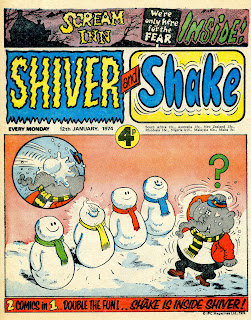 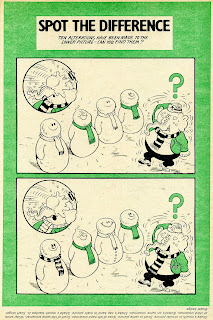 Badtime Bedtime Books were the highlight of Monster Fun Comic in the seventies and Leo Baxendale’s swan song in comics industry. William the Conk included in this 1982 SHIVER AND SHAKE Annual is a reprint of the BB Book No. 25 from MONSTER FUN COMIC No. 28 cover dated 20th December, 1975 where it appeared in full colour. Below are the opening pages of the reprint from the Annual and the original from MFC: 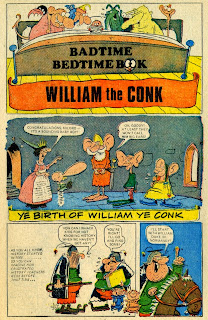 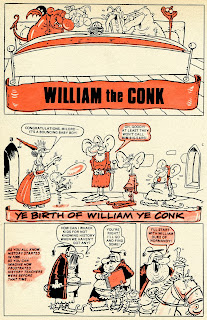