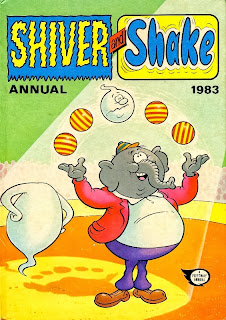 1983 SHIVER AND SHAKE Annual still had the price-tag of £ 1.95 but lost 16 pages and was 112 pages thick. As compensation, some were printed in bright full colour on quality white paper, while the sections with b/w strips were on the good old browned pulp-paper.

Let’s take a closer look at some of the strips. 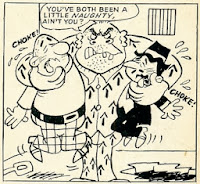 The Forest Legion appeared again after having skipped the previous Annual. In this episode Boss and Butch are not stealing or robbing – they are digging for the stolen loot that Big Butch hid before going to jail. By happy coincidence, the legionnaires find the treasure first. Falling for the legionnaires’ cheeky trick, the two villains dig themselves into Big Butch’s prison cell while the forest animals return the treasure to the rightful owner. 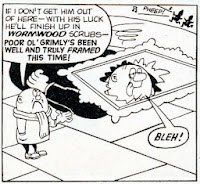 Grimly Feendish is about to become rich at last as he makes his way out from Penthouse Millionaire’s hotel suite with a stolen Popasso painting but his dreams are dashed by a vindictive woodworm whom he has kicked out of his house. The episode must be a reprint.

In the new Grimly Feendish set by Paul Ailey the rottenest crook in the World tries to rob a theatre by joining the company as a ventriloquist. 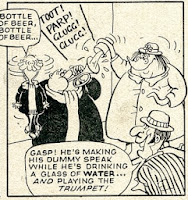 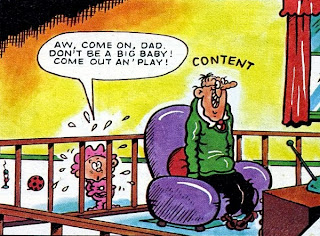 The Annual has 4 episodes of Frankie Stein, three of which are reprints of Bob Nixon’s early sets from either Shiver and Shake or WHOOPEE!, and one is new from the hand of Brian Walker. In it Frankie wrecks Prof. Cube’s car as they are preparing to visit Uncle Bert’s for Christmas.

One set of Ghoul Getters Ltd. was a reprint of the second-ever episode of the strip, originally from SHIVER AND SHAKE No. 72. In the other episode Ghoul Getters Ltd. use one of their very special plans to handle a ghostly circus act, and then hire it out to Window Cleaners: 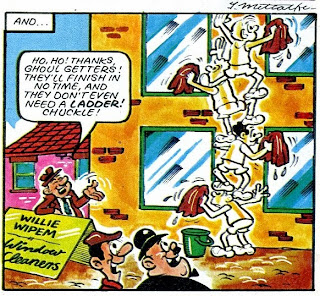 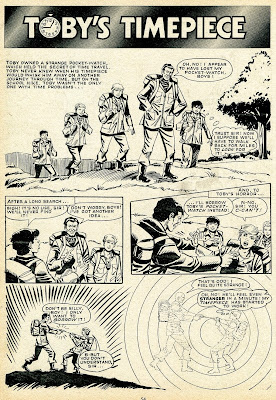 In Toby’s Timepiece, Toby once again finds himself in the future, only this time he gets there together with his clueless teacher. As always, they immediately find themselves in the midst of a menacing situation and a gang of rotten crooks take Toby’s timepiece away. It turns out that in the future it is a priceless antique that can fetch a fortune on the black market because all antiques belong to the state. The crooks escape from the police with their jet-packs while Toby and Teach are led to the security block. The crooks start squabbling over the watch and set it into operation. The timepiece takes them to Toby’s time where they are confronted by Toby’s mates who are concerned about Toby’s and Sir’s sudden disappearance. The greedy men from the future want more “antique” watches but the kids are determined to grab them: 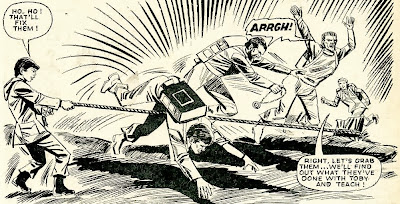 The bump sets the watch off again and the crooks disappear to return to their own time. The timepiece seems to have the ability to bring itself back to Toby so the crooks land in the prison cell. After a good deal of running about corridors of the prison, bashing some policemen and breaking into the control centre to deactivate radio cuffs, cops apprehend Sir and inject him with a memory-erasing drug because they think he has seen their secret records. Catching the cops off guard, Toby grabs the teacher and they both return to their time where Toby surprises his mates and Sir (who remembers nothing that has happened during the last hour because of the injection) with the jet-pack that he borrowed from one of the crooks in the prison cell.

Below is the last panel of the episode of Webster in which the good old spidey saves the bacon of Basil Bond the famous spy as he tries to escape with secret plans by jumping off the roof. Luckily, the spy gets tied up in the end…

Horrornation Street is represented with two episodes. In the first one, that I believe to be a reprint, the Horrors go looking for their ball that a mean parky has kicked into the maze…

The second episode is new material and in it Horrornation Street residents take their X-mas presents to the post office but leave Headley’s head there and finding it among all the X-mas mail turns out to be quite a challenge. In the end it turns out there was no point in taking the presents to the PO in the first place:

This was the third ShSh Annual in a row in which the editors re-used those fine front covers of old SHIVER AND SHAKE weeklies. One became a spot-the-difference puzzle: 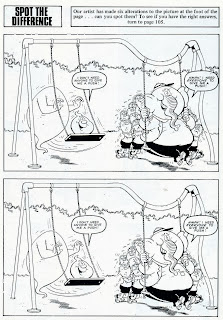 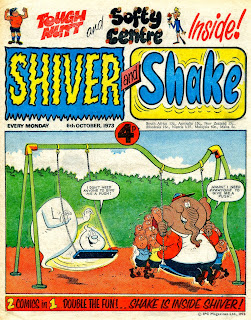 …and the other one was re-drawn by Sid Burgon in this short strip: 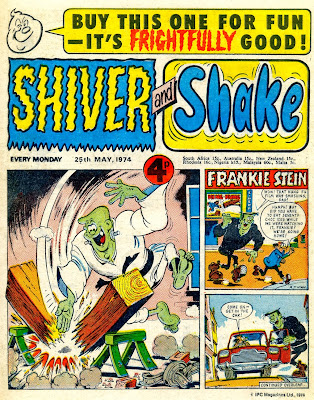 Now let’s look at the strips that hadn’t been seen in SHIVER AND SHAKE publications before.

Tub is a one-page story about a fat kid who tries to earn some cash to buy a birthday present for his Dad. Art by Nigel Edwards: 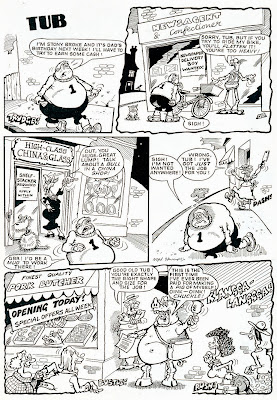 Terry The Terror is a strip about another naughty boy who might very well be Sweeny Toddler’s elder brother. I wonder who drew it? My candidates are Tom Paterson, Mike Brown or maybe Martin Baxendale… I am tempted to say that this is a reprint but if it is, dandruff and pong kind of humour suggests the original must have appeared fairly recently... 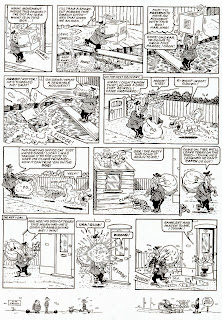 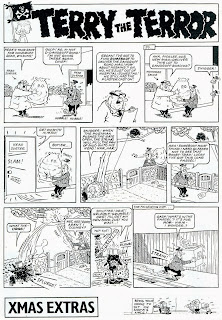 Last, but by no means least, is Uncle Fester’s Gory Story – Robin Blood and His Merry Vampires. The strip really shines in the Annual and is a classic example of a Badtime Bedtime Book from MONSTER FUN COMIC. It has every characteristic of a BBB (8 pages, folklore tale theme, mad script, crazy gags) but it is not from a MONSTER FUN publication. The format of the pages suggests it may not have been intended for this Annual but if it is a reprint, then I don’t know where from. Marvelous artwork by Mike Brown who was responsible for quite a number of classic BB Books in MONSTER FUN COMIC. It’s for tales like this that I love British comics: 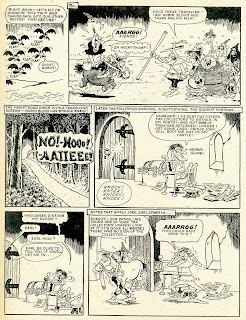 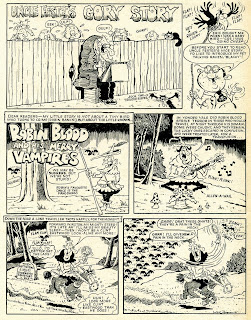 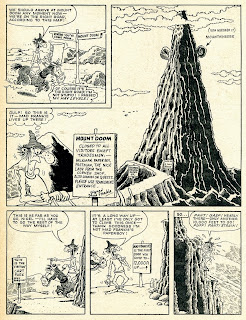 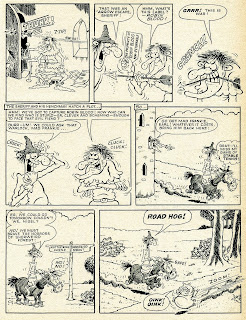 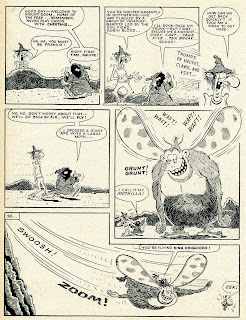 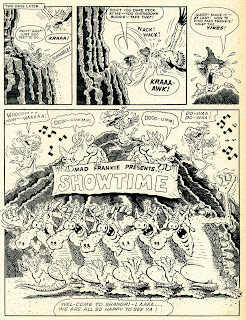 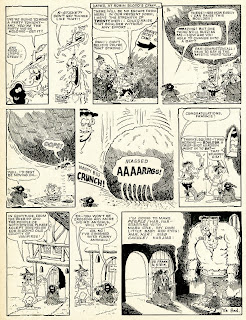 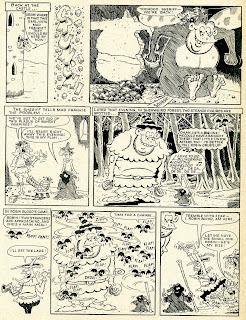