CONFUSION WITH THE CHRISTMAS TREE


Today I’ll do something I don’t normally do on this blog and volunteer a few personal details. Some of my readers may know that I live in Lithuania. When I was a kid it was still part of the mighty old Soviet Union, a country where they tried to do away with Christmas. Why? Because it is a religious holiday and stern builders of Communism weren’t supposed to be religious or celebrate Christian holidays. They celebrated New Year big time instead. I’m not saying us kids didn’t enjoy ourselves back then – New Year festivities and Father Frost was always a highlight of the season at home, at the kindergarten and at school.


There was this cute little rhyme that every boy and girl of my generation knew and still knows by heart. Here is my English translation (a word-by-word one but you’ll have to trust me that it does sound sweet in Lithuanian): Branchy fir-tree / Green fir-tree / Shaggy bear visits her in the woods / Woodpeckers pecker at her slender trunk / Pupils dress her on New Year’s eve. Not a word about Christmas, see?
The reason I am writing this is because the other day I came across a short article about the rhyme. It turns out that it no longer goes down well with the kids of today because they dress their Christmas trees on Christmas and not the New Year’s eve. In order for the rhyme to make sense to kids, some kindergarten teachers changed the last line by dropping New Year and replacing it with Christmas. Word-by-word, the line now goes like this:  ‘Pupils dress her on the night before Christmas.’ The teachers had to use the wording ‘the night before Christmas’ rather than ‘Christmas eve’ to make it rhyme in Lithuanian, but created another problem – kids still find it illogical because normally they don’t decorate their Christmas trees at night…   Of course, children have their own ways of explaining things. The article quotes a little boy who has memorized the ‘new’ version of the rhyme and knows from his parents and teachers that Christmas was sort of banned back in the day. Here is what he had to say: ‘Folks weren’t allowed to celebrate Christmas in the old days, but now its OK, as long as we do it at night and the Russians can’t see us’. I am not sure if my English readers will grasp the humour of this comment but it had me laughing out loud when I read it.

While I am on the subject of the old days, I might also reveal that many Christmases ago I used to be a freelance cartoonist and my comics appeared regularly in the national humour magazine for three years or so. Below are proof-prints of a New Year tale that I drew to a short story of a famous Lithuanian writer who wrote in the age when there was no Christmas. The strip was drawn and printed in 1991. I drew the original on A4 size paper in ink and water colours and lettered it too. I won’t bother with translation but here is a brief synopsis of the plot: village kindergarten teacher asks the janitor to dress as Santa and hide in the old closet to surprise the kids. The troubles begin on New Year’s Eve when a new closet is delivered to the kindergarten and the old one with the janitor dozing inside is loaded onto a truck to be taken to the dump. Having travelled some distance out of the village, the truck runs out of fuel and the poor janitor breaks free. He tries to ask his acquaintance for help but she doesn’t recognize him. The janitor can’t take off his beard because it is glued. Embarrassed by the silly looks he shuns people but runs into his nephew who takes him to the nearby village where the locals are gathered in the club to see in the New Year. The janitor wishes the villagers a Happy New Year on behalf of his village and gives presents to the local kids. Grateful and impressed by the neighbors’ initiative, villagers drive him back to his village in the morning… 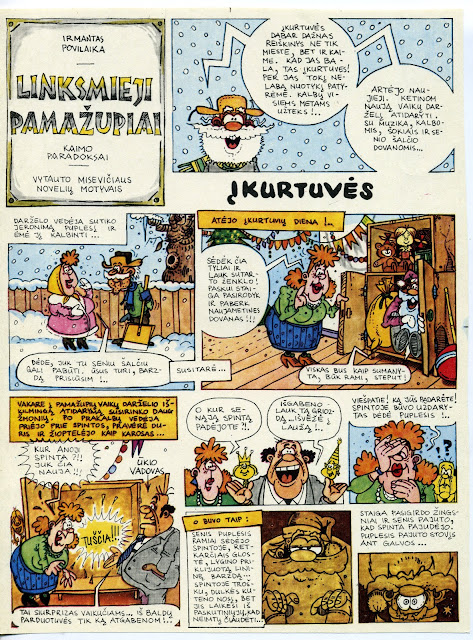 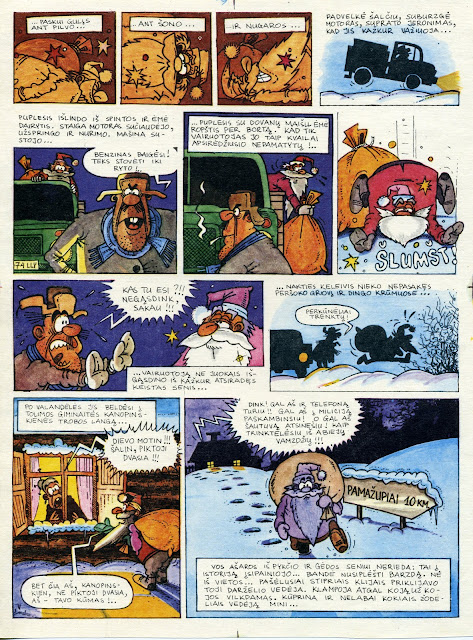 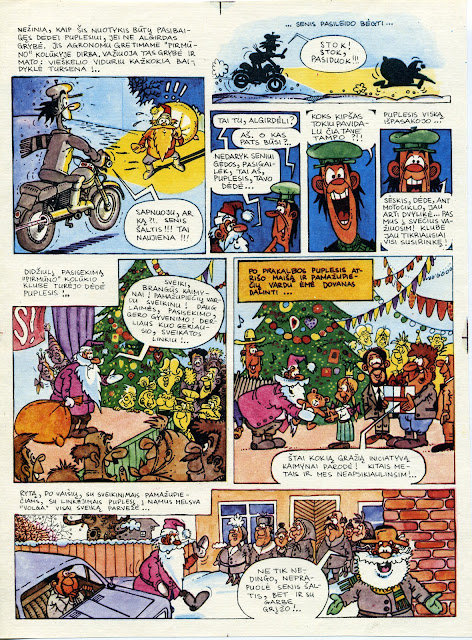